There’s a brand new app that was just released today for Android called Twist. We all have that friend or sibling that is just late for everything right? I’ll be there in 10. Then they leave 8 minutes later are are 20 minutes late. Twist for Android looks to curb that by using GPS to give you a real-time alert on progress, as well as the estimated time of arrival. Read on for more details.

Without revealing exactly where you are to friends and family (who would want to be tracked, this isn’t Mission Impossible). Instead it uses GPS and cell tower signals and location to estimate, and for the most part accurately report when you’ll arrive at a destination. You can fire up the app and then quickly share details, and that ETA information with friends and family, Facebook, or whatever you’d like.

The app obviously knows if you’re walking, driving, or taking public transit as well as letting you chose the options that best fits the situation. I like the fact that once you send out the notification it adds you to their site. While it won’t tell anyone your exact location, the people you’ve sent a notification to can then track the progress, or check for status updates if they are getting impatient. 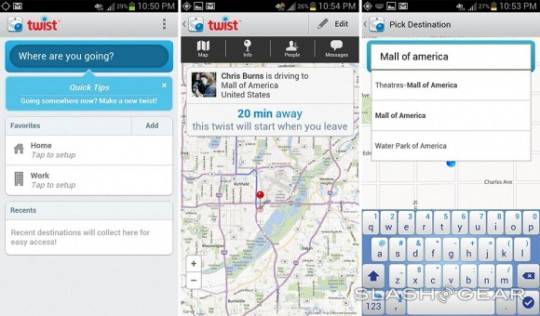 The app actually uses Microsoft’s Bing apps, even though Google’s recently opened up their maps API for developers. While we probably don’t expect them to switch over, the experience has been rather impressive with Bing. Instead of always having to send a quick “be there soon” text message, especially while driving (who does that) you’ll now just fire Twist up as you head out the door — and commute in peace. Get it now absolutely free from the link below and give this neat new app a try.