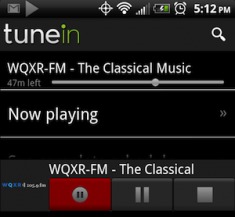 Who knows how long this will last, but RadioTime has released an update to it’s popular TuneIn Radio Pro for Android app which allows for recording of radio streams. Users can simply tap on the red record button and the app saves the stream as an .m4a file. There’s also a DVR function that allows users to pause and backup. Users can then play back the file through the TuneIn Radio app, upload it to DropBox, or even email it to a friend.

The app provides more than 50,000 radio streams of music, news, sports and talk radio. Users can enjoy radio from all over the world and even some satellite stations like Sirius 98. Local radio stations are also available. Audio quality is streamed between 32kbps and 128. And users can also save their favorite stations as presets and create a sleep timer or alarm to record automatically.

When I was kid, you could record broadcast radio and there was nothing anyone could due thanks to the Fair Use doctrine. Then along came the Digital Millennium Copyright Act. So with the music industry going after legal use of music via fair use on every front, how long can this feature really last? So get it while you can. The app is available at both the Amazon App Store and the Android Market for $0.99.