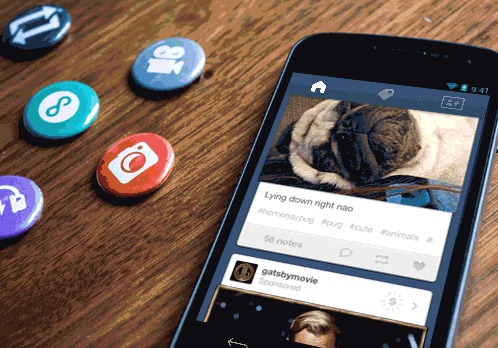 The popular site Tumblr has been in the news quite a bit lately. Mainly for passing the 100 million blog milestone and a few app redesigns, but today we’re getting some less than stellar news. Well, it’s good and bad. The company has announced that they are rolling out adverts for their Android and iOS mobile apps.

They confirm it has been nearly a year since their first sponsored posts hit Tumblr Radar, and all the partners have been loving it. Tumblr makes it sound like a pretty awesome announcement, but the fact is we’ll be seeing potentially up to 4 ads per day on our mobile devices while browsing blogs and resharing content.

Tumblr mentions that these will be separate from original content, as expected, and will be easily noticed thanks to a little animated dollar symbol at the top of each of this type of post. Just like their announcement of ads, some of them will actually be animated themselves which might be a bit obtrusive.

ABC, GE, Pepsi, and Warner Bros are among many that have already partnered with Tumblr, and we can expect many more to join forces in the coming months for their new mobile ad front. In the end Tumblr said it will be casual. Stating “every now and then you’ll see posts from our partners as you scroll through your mobile Dashboard.” No big deal. Get their new and improved Holo-inspired Android app from the link below.