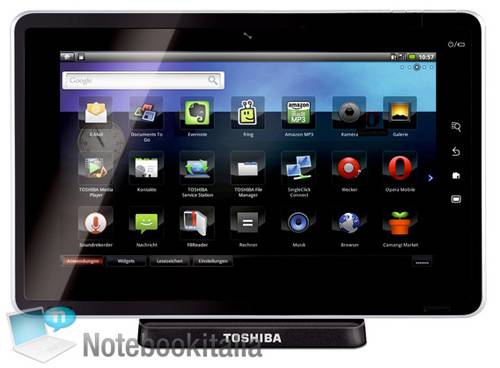 With all the recent Android tablet news, it’s looking like there is going to be a big war in the tablet market, especially the Android Tablet market. If you were thinking that the Galaxy Tab was going to give the iPad some competition, let’s talk about the Toshiba Android Tablet, now being labeled the Folio 100. Let’s get to the meat here, we know you are wondering what will power this tablet.

Yes, it’s NVIDIA’S dual-core Tegra 250, which should help this slate run pretty snappy. The Folio 100 will have a 10 inch screen, with a resolution of 1024×600 and will have the ability to send HD video out of it’s HDMI port. To help give some space for storage, the tablet will have 16gb of internal storage, SD card slot, and both full size and mini USB ports. Internet access will be taken care of by both Wi-Fi and 3G, Bluetooth is enabled here also. If you are a video chat fan this tablet has a 1.3 megapixel front facing camera only.

Toshiba will have Android 2.2 aboard, but they are of course, overlaying a skin on top of it to help make the OS more tablet friendly. Toshiba will be promoting the equipped Opera Mobile Browser that will also be running Flash 10.1. Hopefully, Flash won’t be a battery killer, Toshiba is claiming around a 7 hour battery life. We could possibly hear all about the Folio 100 next week at the IFA-Event, and there have been whispers of an October ship date, nothing is confirmed here though. So as the tablet news keeps coming, we are getting more excited about getting them in our hands and putting them to the test. It should not be long.