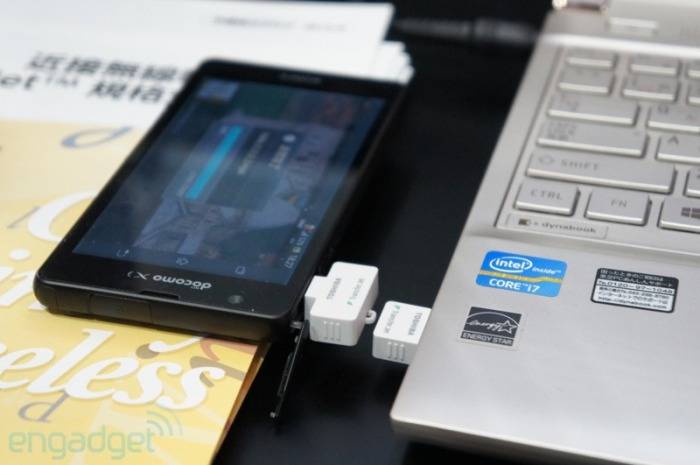 At the CEATEC trade show in Japan, Toshiba has unveiled the latest form that its TransferJet technology will take: a micro-USB adapter that will plug into most Android smartphones. The company has also given a glimpse of a chip utilizing the same technique that may make its way to smartphones next year.

Toshiba first showed its TransferJet technology early this year at the Consumer Electronics Show in Las Vegas. The technology allows extremely high-speed transfers of data, for example, videos, over very short distances, like say a few centimeters. TransferJet is faster than Bluetooth but does not have the distance coverage. On the other hand, unlike NFC, which also operates on very close distances, it allows for the transfer or large amounts of data.

The company showed off the technology embedded in an SDHC card that can be slotted into a digital camera or computer. Now, Toshiba is revealing a micro-USB adapater that utilizes the technology, making it more practical for devices that don’t have SD card slots, like smartphones and tablets. For now, only Android devices are supported. Also seen in Toshiba’s booth was a TransferJet chip that is tipped to be meant to be embedded directly in smartphones instead of as a peripheral.

Toshiba says that a pair of adapters, because of course you’ll need two pieces to effectively use the technology, will have a starting price of 10,000 yen or roughly $100. There is no availability date given for either the micro-USB adapter and especially not the smartphone chip, but rumors put production for the chip to start by the end of this year.