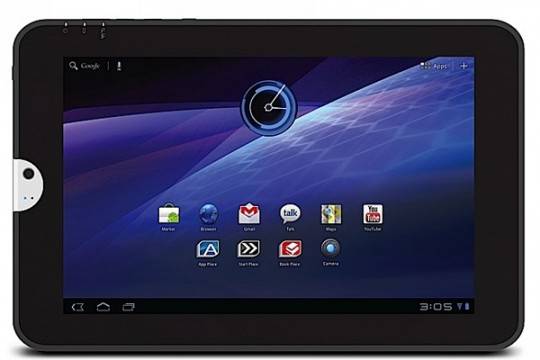 Inside is NVIDIA’s Tegra 2 chipset, along with GPS, an accelerometer, digital compass, Bluetooth, WiFi b/g/n and 1GB of RAM. The battery is a 23Wh pack; Toshiba isn’t saying how long that should last, but being able to switch it out for a second one should answer most questions about longevity.

There’s also twin cameras – 5-megapixels up front, 2-megapixels on the back – USB 2.0 and mini USB ports, a full-sized SD card slot, screen rotation lock-switch and a rubberized back plate for easier gripping. In short, it seems like Toshiba has really thought through a lot of what would-be tablet buyers are looking for, though we won’t know for sue until review units start arriving.