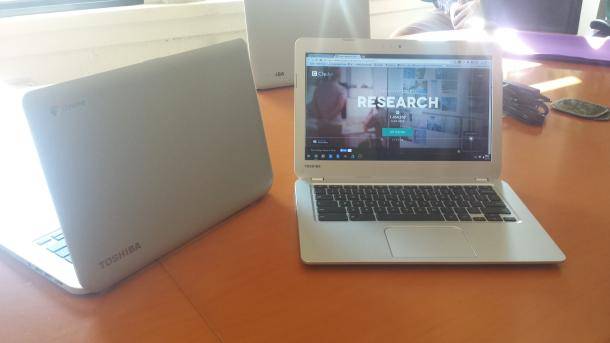 Chromebooks are wildly popular as of late, and could represent a sea change for the PC market. Toshiba, which has always made very solid PCs, has a new Chromebook here at CES. This one is a bit bigger than normal, but not the largest Chromebook out there.

At 13.3 inches, it is a touch bigger than the normal 11-inch variety Chromebooks are, but not as massive as the 14-inchers we’ve seen from HP. The resolution is a disappointing 1,366×768, but it checks in at $279, which is very approachable. It’s a slight 3.3 pounds, and less than an inch thick (0.8-inches, if you’re wondering), making it highly totable. It has an Intel Celeron processor, 2GB RAM, and 16GB Memory.

Toshiba is saying the battery life is right around nine hours, which is not unheard of for a Chromebook. With such a slim OS, battery life tends to be impressive. Chrome OS lends itself to slimmed down hardware, and the Toshiba Chromebook (no, really, that’s the name) is no exception.

Though Chrome OS is lightweight, it’s increasingly powerful. With desktop applications having been introduced, all that’s needed is a more widespread adoption. Once more Developers realize the benefits of Chrome OS, the platform will grow. If sales numbers are any indication, the market is there — and growing. The Toshiba Chromebook might not blow us away, but it also doesn’t disappoint. It’s what we’ve come to expect from the genre; a slim, low-cost, lightweight machine. It will be available starting February 16th.