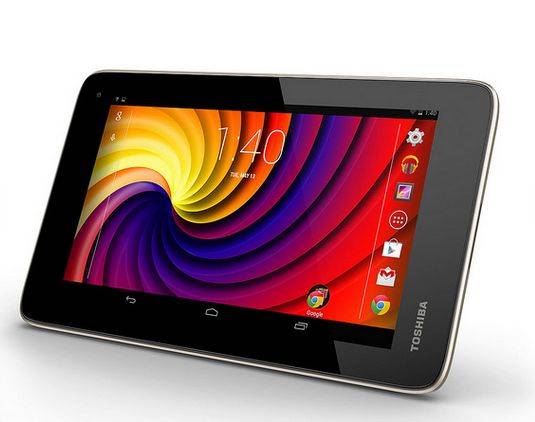 Toshiba has another Android tablet set to arrive in July. This latest model will be the Toshiba Excite Go and it will be arriving to fill out the low priced lineup. The Excite Go will arrive priced with a suggested retail of $109.99.

As one would expect given the price tag — the specs aren’t super high-end. Key here is how the specs appear to match the price point. Toshiba will have the Excite Go sitting with a 7-inch 1024 x 600 display and powered by a quad-core Intel Atom processor. Users can also expect 16GB of internal storage space with a microSD card slot that supports cards up to 128GB in size.

Other spec related highlights include a weight of 12.5 ounces and front and rear-facing cameras with the Toshiba TruCapture app which is said to allow for capture of images “from whiteboards and books by automatically removing borders, straightening distortion, reducing glare and noise, sharpening and brightening contrast – ideal for classrooms and offices.”

Toshiba is also promising up to 7.5 hours of run time and will have the Excite Go loaded with Google apps (including the Play Store), as well as a full version of Office Suite Pro pre-installed. And nicely, the Toshiba Excite Go will launch with Android 4.4 Kit Kat.