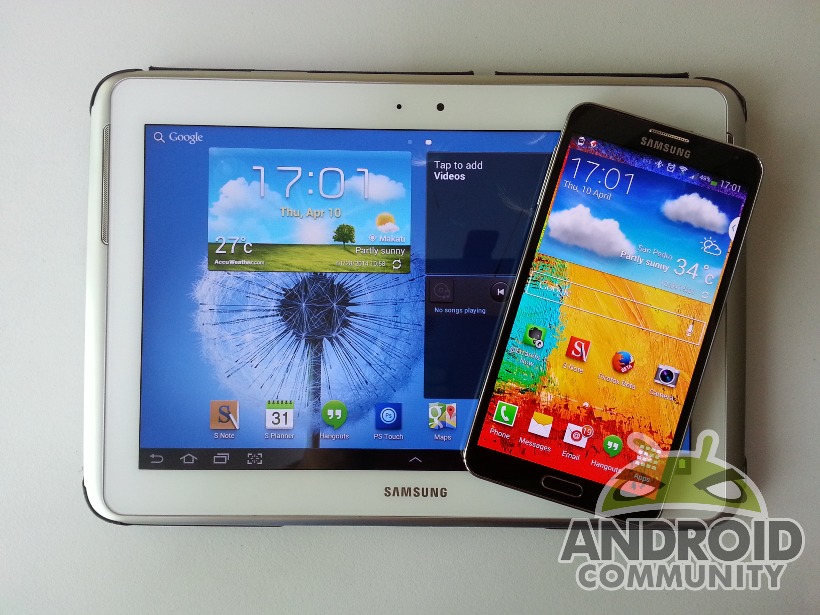 Samsung‘s customized Android has received a lot of flack, and not without good reason. But throwing the baby out with the bath water isn’t exactly a good idea either and Android, especially the vanilla one, sometimes leave some things to be desired. Here are five rather unique features that may make you think twice about thinking that nothing good can come out of TouchWiz.

Let’s start with something that’s easily replaceable, the homescreen. On AOSP Android or even the Google Now Launcher you have a very simple launcher. Perhaps too simple, offering just the below the basics. While you may not have the extreme configurability of launchers like Themer, with TouchWiz you just have enough to personalize your screens without getting bogged down with too much options. You can create folders, arrange icons in a custom order and hide apps, all without having to install another launcher. For aesthetics, you can separately change the home screen wallpaper and the lock screen wallpaper easily. 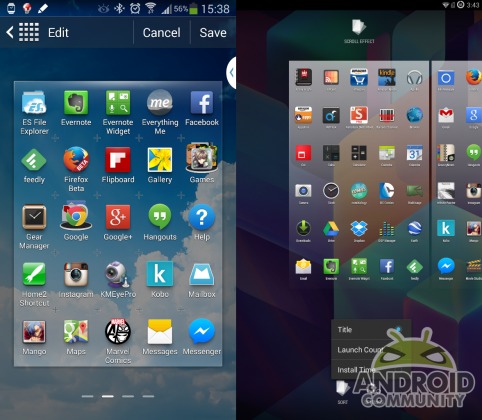 The lock screen is a less unique part of the experience and exhibits pretty much the same features as stock Android. It’s only advantage is how well it integrates with the rest of TouchWiz, including things like Action Memo, which we’ll meet later, and accessories like S-View cover. These two parts of TouchWiz are, of course, easily changed, but their greatest benefit is offering those basic features without the need for third-party solutions.

Our smartphones are increasingly laden with sensors, and Samsung makes good use of them. The Galaxy S 4 debuted with a lot of fancy sensor-based controls, but even some lowly budget device with only an accelerometer benefit from TouchWiz enhancement. The simple act of turning over the phone to mute an incoming call is a very convenient gesture. More recently, Air View let’s you conveniently preview content without having to open it up. Direct Call lets you automatically call the number that is currently shown in a call log, message or contact by simply picking up the phone and bringing it up to your face, without having to tap that call button.

These bits and pieces are most definitely non-essential features but they provide enough convenience that, after some time, you begin to wonder how you lived without them.

One of the biggest and immediately obvious ways Samsung differentiates from stock Android is the way it presents notifications. Instead of the split notificaiton and quick settings setup, TouchWiz uses a unified panel. It definitely does not sit well with many Android fans, but it does have its own fair share of conveniences.

First is that there is really one location and one way to get to things. Instead of having to keep in mind two distinct areas, you only have to learn one.

Second, the quick settings in TouchWiz are presented in a single scrollable row instead of a grid that takes up a good amount of screen space. Given how TouchWiz implements the unified notification panel, one might say Samsung couldn’t have done otherwise. But a single row of icons is still a neater way to organize your most used settings. 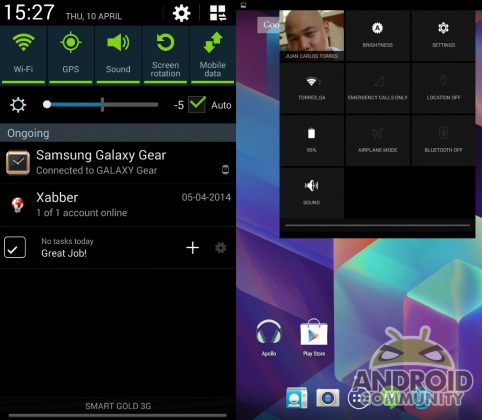 And when it comes to customizing those, TouchWiz makes it even a lot easier. Right there from the notification panel or via a two-finger swipe, you can get access to the set of quick setting buttons. With a single tap, you can jump to edit mode to rearrange which ones are immediately visible in the panel. In contrast, doing this via stock Android requires users to dig deeper into the Settings app, which, as we will soon see, is a whole different monster.

Android currently has dozens of buttons, knobs, and options available to the user and we can expect that number to grow even more. While Android developers and designers do their best to keep the Settings app neat and tidy, they can only either make the list longer or make it deeper. Either way, looking for the right setting might be a hassle, and this is where Samsung’s latest TouchWiz version comes in.

Given that Samsung has added a ton of extra settings, it is perhaps only natural that they provide an easier way to look for them. The new tabbed interface might be debatable, but having a Search feature there is genius. Simply type in a setting you’re interested in and it will show you all possible hits. Even the most advanced Android user will most likely forget some feature or setting, so this Search bar in Settings is definitely heaven sent. 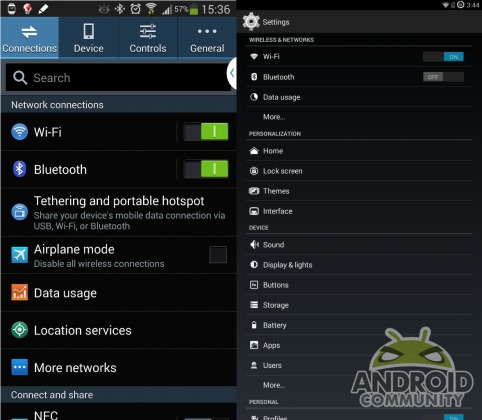 Unfortunately, this feature isn’t available on all Samsung devices, and here you see fragmentation rearing its ugly head again. One can only hope that as devices converge towards Android 4.4, we will see less and less of these wildly varying versions.

Here’s one feature that is both contentious and also not present on all TouchWiz devices. It also needs no introduction. TouchWiz multi-window brings Android multitasking to the extreme, allowing users to have two, or in the case of the Galaxy Note Pro and Tab Pro tablets, up to four “windows” side by side at the same time. You can watch a video while chatting, take notes while browsing, chat with two contacts at the same time, and even drag and drop supported content between apps.

Multi-Window is, of course, possible with some third-party add-ons, but as in the features mentioned above, Samsung takes an extra step to provide convenice. Starting with the Galaxy Note 3, users can create custom pairs of frequently used apps and with the Galaxy S5, they can even run two instances of the same app at the same time.

Unfortunately, neither Samsung’s nor others’ implementations cover the entire gamut of Android apps. Google has been said to be vehemently against such features and it is unlikely that we will see a universal way to support multi-windowing across all of Android.

Here is yet another niche TouchWiz feature, but one that has so far not been implemented by third-party developers, leaving S-Pen users such as this author stuck with a pure Samsung experience. In the Galaxy Note 3, Samsung introduced some new features that are exclusive to TouchWiz and the S-Pen that goes beyond simple pen input and pressure sensitivity.

Action Memo gives you the convenience of that iconic Post-it note, letting you quickly scribble words or numbers and then turn them into actions (hence the name) like making a call, adding a contact, or searching the web. Pen Window, on the other hand, lets you draw a rectangle that can be transformed into one of a few supported apps, putting yet another multitasking feature under TouchWiz’s belt.

TouchWiz is by no means perfect. The colorful and cartoon-like icons have hurt many users’ aesthetic taste buds. Its bloat and sluggishness bemoaned by some have sacrificed many a hair to the deities of frustration and anguish. But TouchWiz isn’t without its silver lining and, like any software, there is hope for change.

Samsung has been seen slowly trying to turn over a new art taste and rumors abound that it will be trying to rein in much of its divergent features. Of course, that’s not saying that Samsung will suddenly stop trying to differentiate itself with unique and custom features. One can only hope there is some sense left in the Korean giant.

Do you have a favorite TouchWiz or Samsung feature? Or do you have a gripe about how Samsung has turned Android into something almost unidentifiable? Hit the comments below and share with the community your thoughts and experiences about one of Samsung’s most disputed feature.