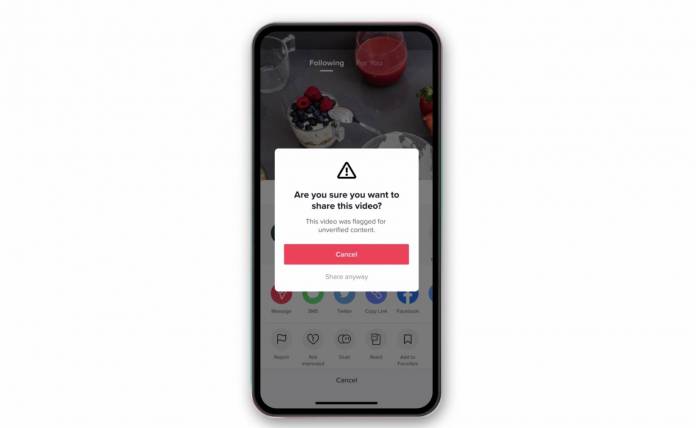 The past couple of years and especially during the start and in the midst of the pandemic, TikTok has become the app of choice both for viewers and for content creators. Well, at least those who want to create short and fun videos. But it has also become a source of misinformation and fake news and so now they are creating tools to fight “inauthentic, misleading, or false content”. They are now prompting users to think about it carefully before sharing posts that have been tagged as “unsubstantiated”.

Tiktok has a system in place for identifying misinformation. Posts that have been reported and verified as containing misinformation are marked as such and removed from the platform. They have partnered with fact checkers at PolitiFact, Lead Stories, and SciVerify to check the accuracy or lack of accuracy of the reported content. When the result is inconclusive or if they are not able to confirm the veracity of the content, the video becomes ineligible for sharing or recommendation.

Now, TikTok is giving users a prompt when they are trying to share something that has been marked as “unsubstantiated content”. Viewers will see a banner on the video in cases where it has already been reviewed but has not been validated. The banner says, “Caution: video flagged for unverified content”. The creator will also be notified that the particular content has been flagged and that there’s a warning banner that your viewers will see.

If anyone attempts to share it, you will get a prompt that will ask you if you’re sure you want to share unsubstantiated and unverified content. You will still be given the option to “share anyway” or to cancel but at least this should give you a minute to think about whether or not you will share something that may be false or misleading. TikTok says their testing showed that having this decreased the number of shared, unsubstantiated videos.

This new feature is available in the U.S. and Canada for now but hopefully it will also be available in other territories. TikTok has also partnered with the National Association of Media Literacy Education to roll out a series of educational videos called “Be Informed” which will explain things like the difference between fact and opinion, how to analyze graphics, understand sources, etc.