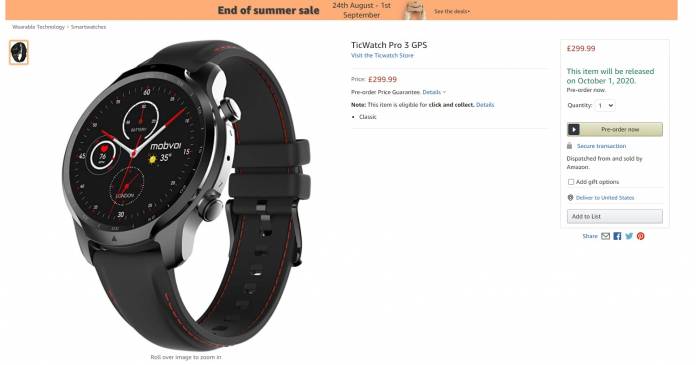 Someone may have pushed a button too early on the Amazon UK website as a TicWatch Pro 3 suddenly showed up on the product listing. The smartwatch from Mobvoi has yet to be announced although there have been rumors of course. The product page has not been taken down but the phots were changed to a generic smartwatch and the price was changed to something more expensive. The estimated release date is still there and it’s indicated as October 1, just almost a month from now.

A couple of months ago, Snapdragon unveiled its Snapdragon Wear 4100 and 4100 chipsets which will give improved battery life and faster processing for your Wear OS devices. They also mentioned that Mobvoi is the first OEM that will be carrying the new SoC although they did not specify which model. With the appearance of the TicWatch Pro 3 on the Amazon UK site, people started wondering if this was it.

Well, maybe Mobvoi wasn’t ready yet to officially unveil their new smartwatch. According to Android Police, the official price indicated was £299.99 or approximately $400 but when the page was discovered, it became £399.99 and the photo was also changed to that of an ordinary smartwatch. The only thing we know so far is that it might be the watch that Snapdragon was referring to that will be using Wear 4100 but not the newer Wear 4100.

Even though Wear 4100 is of course better than the current Wear 3100 SoC since it uses a more modern 12nm manufacturing process, it won’t bring a drastically better battery life. Wear 4100+ is of course the more “exciting” one as it has an upgraded co-processor but so far, we aren’t hearing of any upcoming Wear OS that will already be using this as a processor. We might see one later this year and it’s supposed to have faster responsiveness and low-power heart rate monitoring.

Amazon UK has kept the October 1 shipping date on the TicWatch Pro 3 page so we might actually see this be officially announced anytime soon. We’ll keep an eye on the page in case anything changes.