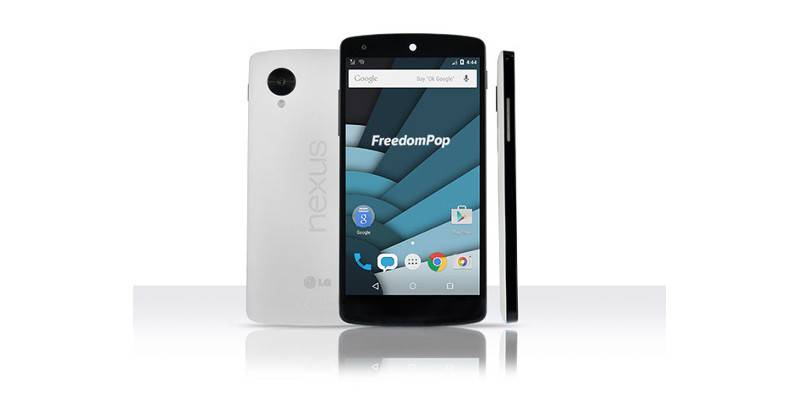 What’s better than a Nexus 5, you ask? Well, one that comes with a year of hassle-free wireless service courtesy of FreedomPop, of course. This Nexus smartphone may have been forced to bow out of the Google Store to make room for the larger Nexus 6, but it still ranks as one of the most desirable smartphones to date. And just because Google is no longer selling it doesn’t mean you can’t get it elsewhere. Like in this Nexus 5 with a year of unlimited Talk and Text from FreedomPop.

The Nexus 5 almost has it all. A handy 5-inch screen with a decent 1080p resolution. A 2.3 GHz quad-core Snapdragon 800 processor with a decent 2 GB of RAM. Though the 8 megapixel rear camera and 1.3 megapixel front shooter may seem dated by now, they can still make do in a pinch. Plus, the promise of a pristine, vanilla Android experience the way Google wants it and a more open hardware setup is enough to draw power users to the smartphone.

FreedomPop is a budding wireless service provider in the US and has been stepping up its efforts to gain new fans with its affordable and hassle-free plans. Put the Nexus 5 and FreedomPop together and you probably have a winning recipe. With this deal, you get a year’s worth of service from FreedomPop, without contracts and without early termination fees. That’s unlimited calls and unlimited messages, plus a 500 MB allocation a month on FreedomPop’s 4G LTE lines. You also get a year of visual voicemail, usage alerts and even tethering thrown into the package.

All of these you get for only $199.99. When you consider that it comes with the Nexus 5, the 65 percent discount from the $582 original price begins to sound like a very good deal indeed. And, if you decided to cut your ties with FreedomPop after the one year is over, you can easily just cancel. Otherwise, your credit card will be billed monthly. So grab the chance to get an increasingly rare Nexus 5 and grab a FreedomPop subscription along with it.

[UPDATE] The Nexus 5 is still hot and quickly sold out! Don’t worry, though, because a white Nexus 5 is coming to the rescue. It’s still the same deal, with a year’s worth of FreedomPop service. Except now it comes in a pearly white package. So grab it while supplies last! (Links have also beenb updated)