Themer, the popular new app/launcher, has a waitlist approaching several hundred thousand people. The promise is simple: theme your device easily, making it appear fresh on a whim. Accomplished via a link to their MyColorScreen site, which houses various themes for you to use (as well as a tool to build your own!), Themer wants to make the fussy task of theming a device as simple as looking through a picture gallery. No wonder the wait list is so long.

They’ve succeeded in their mission, too. In my hands-on with the newest darling of the Android world, I can safely say I’m wholly impressed. While I’m still a dyed-in-the-wool Nexus user, I find the ease and function of Themer a pure joy.

Right now, the Themer team is doling out about 5,000 invitations a day for their closed beta product, which is meant to alleviate some pressure on their servers and create an overall great experience for everyone using it. It also gives them a better chance at responding to complaints and bugs, of which there are plenty. If you’re lucky enough to get the invitation code, you’ll have to make a quick choice: Themer is only good for one device, so if you have more than one you’d like to try Themer on, choose wisely.

After entering the invitation code into my Nexus 4, Themer took a second to start up. You’re initially taken through a few screens (seen below), which give you insight on how to use the app/launcher. After that, you’re directed to the gallery, and free to peruse the offerings they have.

The upside is that it’s easy as sin to use, and the themes are great. Themer has done a fantastic job of having a good selection of really diverse themes available for use straight away. Loading them onto the device is done in a few clicks, and you can change as often as you like. The utilities within the themes can be changed as well: choose your browser of choice, or music service — even the RSS feed can be switched. Any changes still keep the same look and feel of the theme you’re using.

The pitfalls come from Themer being a beta product. In an attempt to resize a widget, it went wonky and settled itself halfway between two screens. I had to reload the theme, which of course didn’t take long at all, but it was frustrating. Once reloaded, the same thing occurred, so it wasn’t a one-off error. I can’t say this happens with every theme, or even every time, but it happened a few times with a few different themes, so I’m willing to say it’s just part of the beta growing pains. It was, happily, the only issue I encountered which made a theme unusable.

There were other small issues, like an app not wanting to be deleted when drug up to the “X” at the top of the screen. Using the notification bar often required two swipes, and it remained hidden — a problem if you use it to see who’s trying to reach you. The widget lock/unlock situation is also clumsy right now (you have to unlock widgets in a theme to change them, then lock them again to set the theme), but these are beta issues, and should be appreciated as such. 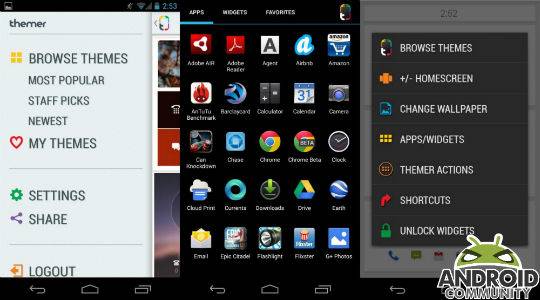 Another little tweak I’d like to see is Themer supporting more than one service. If, while in a theme, you click on the weather app or widget, it takes you to The Weather Channel app, or the Play Store link if you don’t have it. That’s just not adequate, considering there are so many good weather services, and Google Now is fast becoming my weather info source. Like the Google Now widget takes me to the weather card within Now when I click on it from the widget, I’d like to see Themer do the same.

The gift and curse of Themer is its subjectivity. While the themes are pretty cool, and can be changed, doing so is a bit fussy. It’s good for those who wish they had a different background or want to resize widgets, but it can still get very detailed and tricky. This is easily maneuvered by being careful about which themes you choose for your device, and sticking close to the design they offer, but even if you screw it all up, a new theme is only a few clicks away. 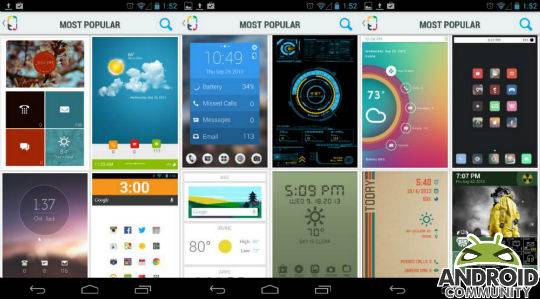 For my “I didn’t even pay for this” money, it’s a whole lot easier to work with Themer than rooting a device, flashing a new ROM, and/or navigating through a cumbersome website to get a new theme. This all happens via an app, and the offerings within are pretty great. I don’t have wade through the Play Store, or a website. I don’t have to invest a lot of time, and can change my mind about my theme at any point. It really is as simple as window shopping, and that makes me more apt to use — and keep using — Themer.

The line for Themer is long, but worth it. Still beta, and still being tweaked and fiddled with, Themer is already one of the better launchers around. The list of desired fixes is long, and I’d love to see some tablet support, but it’s really a very unique concept backed by a well thought out user experience.