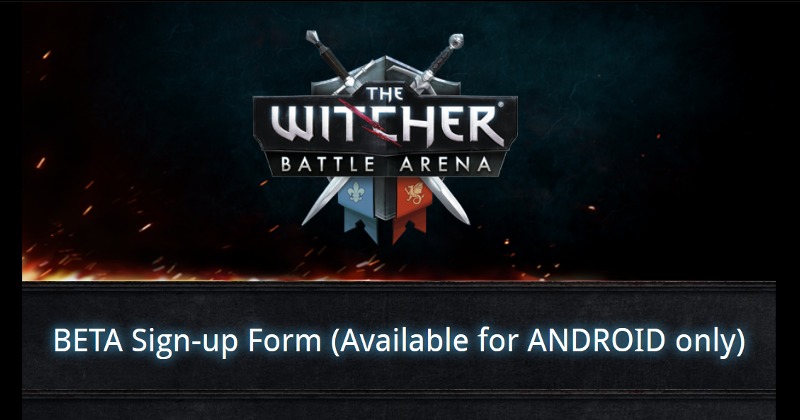 If you’ve had your fill of what is now practically known as the Multiplayer Online Battle Arena or MOBA genre for PCs, wait till they saturate Android as well. The popular RPG franchise The Witcher seems to be eying that particular market and has started accepting closed beta sign-ups for its own MOBA title called what else but The Witcher Battle Arena (henceforth called TWBA for brevity).

TWBA was revealed back in July and seemed to promise to do things a bit differently from the conventional concept of MOBAs. For one, the “Multiplayer Online” part is actually optional, as you can opt to engage in 3v3 assaults or venture off in your own offline solo campaign. Secondly, CD Projekt, creators of The Witcher series, wants to assure players that this will not be a pay-to-win game. You can play everything absolutely for free and won’t have to spend an unreasonable amount of time just to unlock certain parts or features of the game. Still, if you are the impatient type, there’s an option to save yourself some time for a price.

As the name would suggest, TWBA brings the cast of The Witcher series into your hands, save for protagonist Geralt. As with any MOBA, these “heroes” exhibit their own personalities and powers. The game offers two playing modes. The usual Arena pits you against other characters in the usual death match gameplay. Conquest Mode adds a bit of spice to the competition by dividing players into teams and putting multiple goal posts along the way. TWBA promises an interface and playing style that is designed specifically for mobile devices, though the exact implications of that are yet to be revealed.

Those accepted into the closed beta stage will have access to all 8 characters available from the roster and will be able to dish it out in The Arena and Korath Desert maps. They will also be able to developer their prayer profiles with stats and skills like in many RPGs. Interestingly, the closed beta is available for Android only, when the usual practice prioritizes iOS devices. The reason, according to the press statement, is because of the diversity of Android hardware out in the wild. Nonetheless, the game will launch, presumably simultaneously, on Android, iOS, and even Windows Phone sometime later this year.