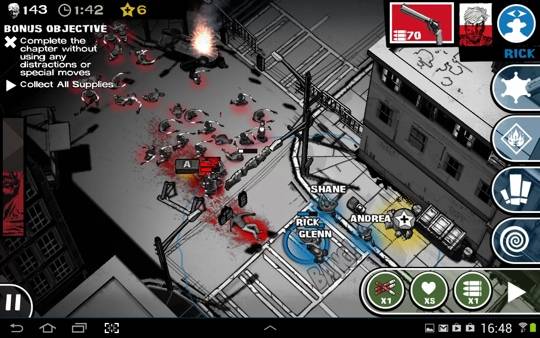 It looks like it may be a good time for those who happen to be fans of The Walking Dead and are also into gaming on Android. Simply put, The Walking Dead: Assault has arrived in the Google Play Store. The game has arrived after spending more than 6-months being available only for iOS.

Putting aside the disappointment of Android users once again having to wait, this game comes courtesy of Skybound LLC and is described as dropping you in at the point when Rick wakes in the hospital. This release is Episode 1 “Days Gone Bye” and has the user playing as their favorite characters from the series.

Users will have to assemble a team of four and proceed to hunt for supplies and upgrade their gear along the way. Options of characters include Rick, Glenn, Shane, Carl, Andrea, Lori (and more) and the game will have users looking for what is described as being “unique special character abilities” to help them survive against the walkers.

Otherwise, this game release also comes with some bonus Walking Dead content. This extra content can be unlocked by completing bonus objectives and other challenges along the way. Aside from some wallpapers, the extra content is also said to include “behind-the-scenes trivia, Google Play Achievements and much more.” The game is available for $2.99.

While this game release should be welcomed, it looks like the season 4 television trailer was also released during Comic-Con. The trailer measures in at just under 4 minutes and 30 seconds and well — serves as the intended purpose of being a trailer. Basically, it gives you just enough, but leaves you wanting to see more. Season 4 is set to begin in October.