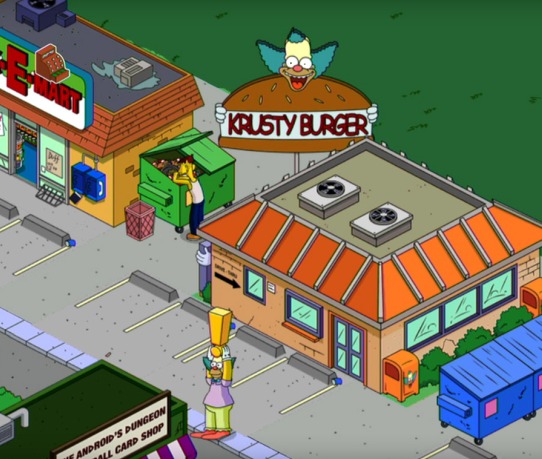 This is quite possibly the best news I’ve heard all day. EA Mobile is planning to release a brand new game called The Simpsons: Tapped Out according to CNET. EA is expecting this to be one of the biggest mobile game titles of the year for them, and in general. If you are a mobile gamer this should definetaly have you excited.

The pictures provided look pretty awesome so far, as does the story line. This will be a building and strategy game where players will get to rebuild the town of Springfield. Goofy Homer causes an explosion and blows up the nuclear power plant, and city of Springfield. No characters actually get hurt but instead are scattered throughout the city. Players will have to gather the characters while rebuilding the city and other various quests. You can unlock and play as multiple characters in the Simpson family as you progress through the game. Sounds good right?

Lisa is unlocked first and helps daddy Homer clean up the city. Along the way players will be treated with the usual Simpsons’ trademark brand of humor. The entire freemium model might make a few unhappy but the model of freemium games is getting bigger and bigger. You should be able to play for free but users can make in-game purchases for faster achievements, unlocks and other things. I’m hoping that in-game purchases aren’t necessary to beat the game and will just make things quicker or easier, but I have a feeling that wont be the case. I’ll gladly buy some donuts and beer for Homer along the way, but not everyone will want to do the same.

We are hearing this will sadly land first for iOS in the coming weeks or months. And EA expects it to be a smashing success for iPhone and iPad. According to the reports it will later land on Android, hopefully within a month or two but nothing was confirmed. It looks like we might be waiting a few months for another awesome game.