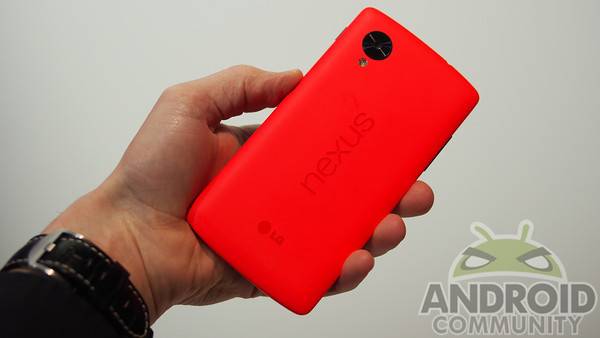 The Nexus 5 recently became available in red, which has definitely turned some heads. One thing is certain: it’s bright. The third color available for the Nexus 5 certainly looks different, but is it a good different? We go hands-on to find out.

First, it’s difficult to actually capture the redness of this device. In just about every instance, it looks different in pics than it does in hand. The red Nexus 5 has an orange-y tint to it, which really doesn’t register as “red” to many of us. The handheld is bright as can be, so if you lose sight of this one in any instance, you’ve accomplished something.

The red Nexus 5 actually looks a lot like the red bumper case available for the model. To that, if you really wanted this phone for some reason, but already purchased the black or white version, you could get the case and achieve the same effect. Red all the way around, the only thing cutting through the red is the volume rocker and power button on the sides, and camera around back. Perhaps most polarizing is the red speaker grill at the top of the device, which may take away from the sleekness of it, much like the white speaker grill on the white version.

Unlike the white version of the Nexus 5, which stops short of wrapping all the way around to the front, the red ensconces the device. Like we said, it’s a bit orange, but if you’re looking for a loud phone — this is it. The Nexus 5 is still one of the best Android devices around, and nothing has changed internally, so for those who want to stand out…the red Nexus 5 is all you.