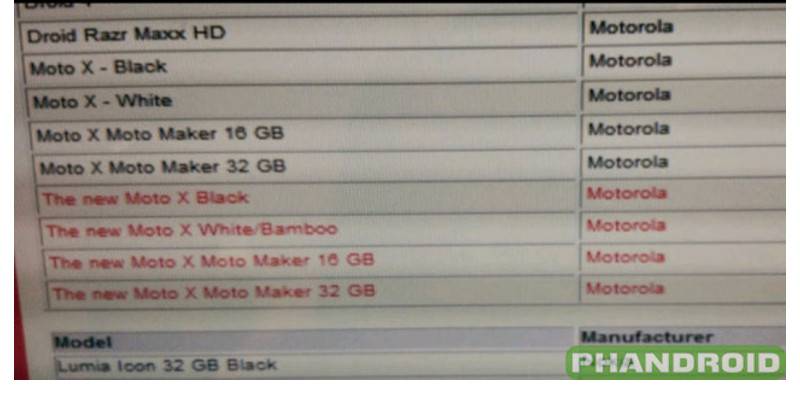 Just three days or so before Motorola makes its big announcement and we’re still getting last minute leaks about the Moto X+1. Here labeled as the “new Moto X”, which sounds like a page out of someone else’s marketing book, Motorola’s next flagship is shown to be available from Verizon from the get go, including a few configuration options as well as Moto Maker customizations.

The Moto X and, for an even longer time, the Moto Maker service was initially available to only one carrier. Whether Motorola has seen the light or is just doing it differently this time, it seems that its next premiere smartphone will be available from Verizon right at launch. But more than that, Verizon’s subscribers will also be able to buy and customize the Moto X+1, or the New Moto X if you prefer, to their taste from Moto Maker, without having to wait for a few months to get their hands on the service.

But what exactly will those options and customizations be? The screenshot of Verizon’s system confirms previous rumors and leaks about some of the choices that will be made available to users. Of course there’s the typical black, but the white version won’t just be plain white. This white device will come with a bamboo back cover, one of the more anticipated options back in the Moto X’s days. For devices designed with Moto Maker, there will be two configuration options of 16 and 32 GB. We will presume that the same two colors mentioned previously will be available from Moto Maker as well.

It isn’t known though, if these offers are exclusive only to Verizon or if Motorola, and Lenovo, will be playing fair this time around. Whichever path it will take, we will most likely hear about it on Thursday, September 4, when Motorola unveils not only the Moto X+1/The New Moto X, the Moto G2 (“The New Moto G?”), the Moto 360 (finally!), and probably a Bluetooth earpiece as well. Join us as we trek the treacherous jungles of IFA 2014 for the next few days to bring you Motorola’s latest gadgets as well as those form other manufacturers.