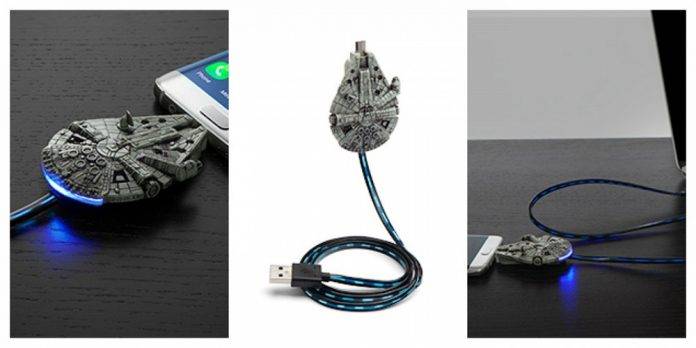 You probably saw that post about the R2D2 coffee press making the rounds on social media last week. But what if you’re a Star Wars fan but not a coffee drinker and you would like to have something cool lying around the house to announce that you are a die hard fan? Well, aside from those gazillion funko pops and posters and toys that you have. You now can have the coolest (and geekiest) charger around with the Star Wars Millennium Falcon micro-USB charging cable.

Lest you think this is just some cheap imitation of the beloved and legendary starship, this is actually an officially-licensed merchandise so yes, it has the blessings of the Rebel Alliance and the dearly departed….ooopps okay that may be a bit spoilery for those that have been living under a rock and did not see The Force Awakens. Anyhow, this charging cable will not be able to help you destroy Death Stars, but it will of course bring power to whatever device you’re charging that supports micro-USB.

This exclusive ThinkGeek creation has a 34” long cord that lights up and animates its blue strip when you’re using it to charge a device. You can also use it for file transfers with its USB 2.0 and micro-USB connectors. The plug is attached to the front of the ship and even when you’re done charging, the thrusters stay lighted even as the animation stops.

The Star Wars Millennium Falcon micro-USB charging cable is now available for purchase at the ThinkGeek online store. It will only cost you $19.99 so if you’re a true blue Star Wars fan, it will be worth it. Now if only you had a Rey to fix this when it gets broken (hopefully, not anytime soon).