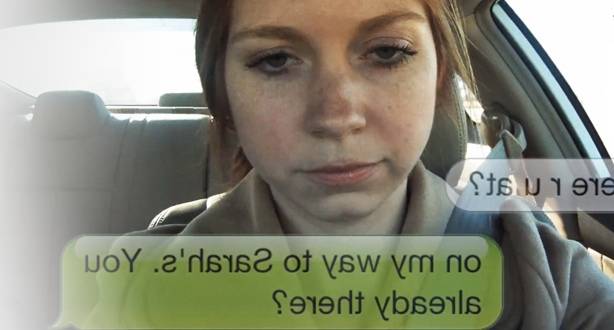 There is obviously some overlap of good and bad use when it comes to a smartphone in the car. We can look towards the good being when information is feed to you such as for navigation or music. On the flip side, the bad comes when you are feeding that information such as replying to a text message or email. I am sort of touchy on this topic so I will avoid any deep ranting, however despite regularly seeing people looking at a smartphone as opposed to the road — I was still somewhat surprised by the numbers in this report.

The report comes by way of AT&T and ties in nicely with their “It Can Wait” campaign. Basically, it shows that nearly half of adult commuters are now guilty of texting while driving. And as we often look towards the adult to be a good example for the younger generation, the adults are actually worse in this instance. The report shows 49 percent of surveyed adults texting while driving. For those looking for the comparison, the teens came in with 43 percent. Better, but still pretty bad when you consider it takes only a second for something tragic to happen.

Sticking on the adult commuter side here, of those surveyed, 98 percent admitted that sending a text message or email while driving is not safe. Almost everyone agrees that it is not safe, yet nearly half are still doing it. That should give everyone a bit of pause. This latest survey also shows that this is a problem that is only getting worse. It revealed that six out of ten didn’t text and drive three years ago.

I tried, but here comes a bit of a rant. It takes only a split second of looking away to cause an accident. And by accident we are not only talking about hitting another car, but also swerving off the road and injuring yourself. Or for that matter, damaging your car. For all those who like to roll through a stop sign or a right on red, that is not the time to take your eyes off the road either because there may be a pedestrian close. Bottom line here, if you must check your messages while in the car have the courtesy to pull over, or at the very least, do it when you are stopped at a red light.