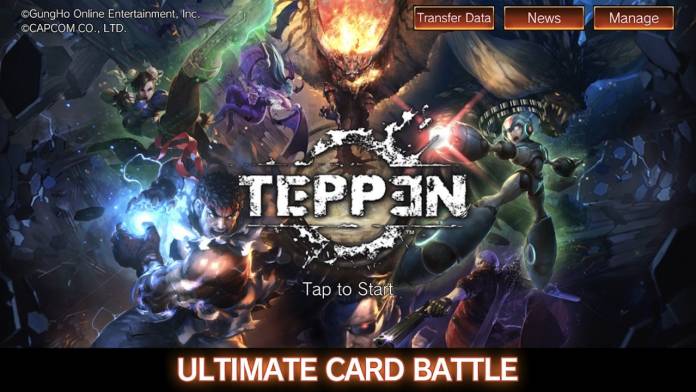 The Android community is compromised of different kinds of people. One group we’re particularly interested in is the avid gamers who try games, old and new alike, and see if playing on mobile is a better experience. We’ve featured dozens to hundreds of games already and card battles aren’t exactly a favorite but we know a lot of geeks and nerds who could spend hours on a game, playing several rounds. The latest card game we know is TEPPEN from GungHo Online Entertainment.

TEPPEN is a card battle game that will challenge you to finish and reach the top. This Ultimate Card Battle game will have you commanding and operating in real time. You’ll need to do some major dynamic actions and attacks within a cutting-edge battle system.

It’s said to be the Ultimate Card Battle game because of the many familiar characters you can play. Watch out for characters from Resident Evil, Street Fighter, Devil May Cry, and Monster Hunter among others. The story starts with those iconic Capcom Heroes getting together and being challenged to battle through the Land of Illusion. The end goal is to discover the truth we’ve never heard before.

It’s important if you know all the Capcom universes so it will be fun to follow the storyline. Choose from different game modes like Solo Play, Ranked Matches, and Grand Pix. You can either follow a story of one specific hero or play with other gamers where you will be ranked. The Grand Prix will make you fight in limited-time elimination battles.

The battles are quick-paced so you need to focus. You may watch out for Heroes, Unit Cards, and Action Cards if you want to fight for your life. Take advantage of the Hero Arts (Special Moves) and Active Response (turn-based battles) you can use.

TEPPEN is now out on both Android and iOS. You can download stratght from the Google Play Store.