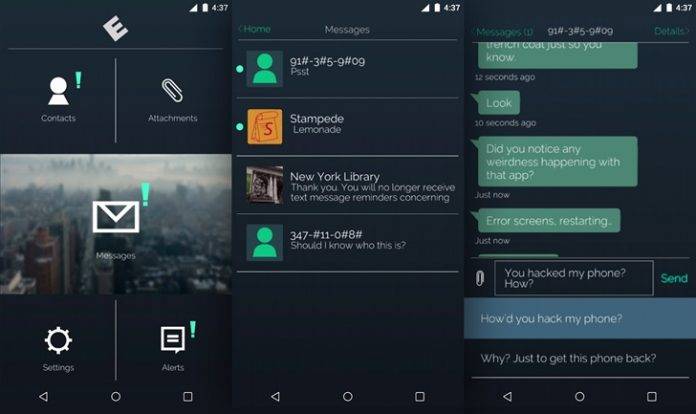 If you can’t get enough of the USA Network’s Mr. Robot, then you better pay attention to this next piece of news that might just satisfy your craving for more hacking and psychological thriller adventures. A new title from popular game publisher Telltale Games is the official tie-in game with the show and it’s called Mr. Robot:1.51exfiltrati0n.apk. But unlike previous games that they’ve released, this one seems to function like a messaging app, and how you react and answer to it will determine the course of the game.

Mr. Robot is currently in the middle of its second season and it has just been announced that there will be a third one. But superfans are probably wanting to have something to do when the current season finishes, and this game might just be the answer. The story is set during the first season and you find a phone outside the Fun Society Arcade at Coney Island, and apparently it belongs to Darlene, one of our titular hero’s hacker friends. You need to return it to her but E(vil)-Corp will try to prevent you from doing so.

The game is set up like an instant messenger, and through it, you will receive instructions from FSociety, where of course Elliot and Darlene are part of. The story is played out in “real time” and you will react to them and your choices will affect how the game plays out. Other characters’ particularly Elliot and his very loose grasp on reality, will also play into this game.

You can download this game from the Google Play Store for $2.99, but everything’s all-in. We’re not yet sure if it will also episodic like other Telltale Games, or if this is it. And even if it’s the latter, you probably will have a lot of fun acting like you’re part of a really cool hacking group hell bent on destroying a corporation that’s trying to take over our lives. This sounds like a very familiar narrative eh?