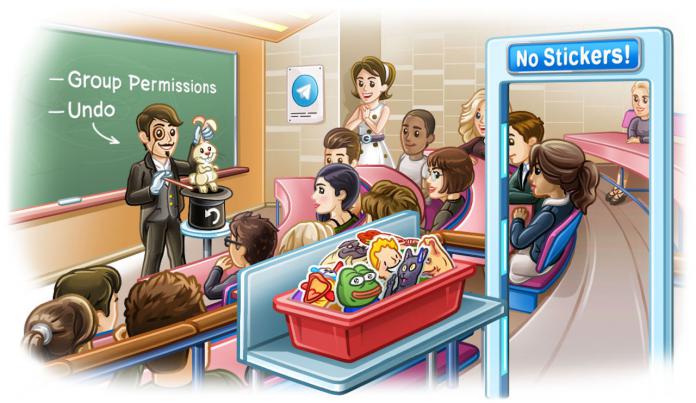 When Telegram brings you updates, they really do bring you updates. They may not be as major as you would expect, but little tweaks when put together still counts as a lot. This latest one brings you better group permissions, expanding the number of members in a group, the ability to undo messages that you deleted, sorting your contacts better, thumbnails for photos and videos before you download them, and other smaller new things. Plus, they also promised another update coming in a week or two.

One of the more popular uses of Telegram is to have massive group messages. Previously, you could “only” add up to 100,000 members but now they’ve doubled it up and one group can have as many as 200,000 members. To make it easier to manage this, they now have group permissions in which admins can restrict members from posting a specific kind of content (photo, video, GIF, etc) or to restrict members from actually posting messages and just let them read what admins are posting.

If you’re the type to always accidentally delete chats or an entire chat history, you will now be able to undo that, at least for the next five seconds. You’ll get a confirmation dialog box asking if you really wanted to delete that and then an option to restore it if you didn’t mean to. But if you don’t respond within the allotted time, then you will lose those chats forever.

Some of the other minor new things you’ll enjoy with this update include being able to sort your contacts either by name or by last seen time, adding an ultra-light thumbnail to photos and videos so you won’t get bored while waiting for them to download, and a face-lift for the dark theme which was previously introduced.

You can update your Telegram app to the latest version to enjoy all of these new things. We wonder what more they’ll be bringing in a promised update in a couple of weeks.