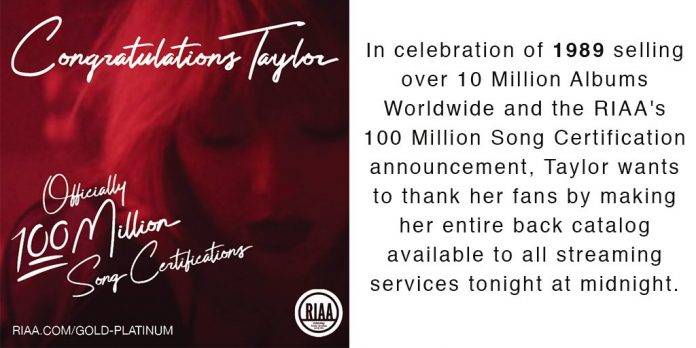 Swifties the world over are now probably happily playing their idol’s entire discography as Taylor Swift announced that all her albums, including deluxe editions, are back on streaming services now. And we’re not just talking about Apple Music, but all the other major ones like Amazon Music, Google Play Music, and yes, even her “best friend”, Spotify. This was to celebrate the fact that her last album, 1989 (released back in 2014) has reached 10 million album sales worldwide and also the RIAA’s 100 million song certification announcement.

Swift famously quarreled with streaming services, specifically Spotify back in 2014, as she felt it was unfair for these services to not compensate artists when their songs are streamed when users are in their 3-month trial period. So she pulled out all her albums and just went exclusive with Apple Music in 2015. But it looks like the fight is over (she eventually won of course) and so all her albums, from her eponymous first album to the aforementioned 1989, including all Deluxe Edition bonus tracks.

But of course there are other theories as to why Taylor decided to go back to streaming at this time. One is that she is probably working on a new album and they realized that streaming is extremely important for any artist. The other is that archival Katy Perry just released her latest album and she wanted to steal the thunder. The first one is more probable although you can’t discount the other.

But in any case, fans of the pop country artist should be just happy they can stream all her songs again while waiting for that new album. And based on social media reaction, they are endlessly playing all those hits and most likely singing along.