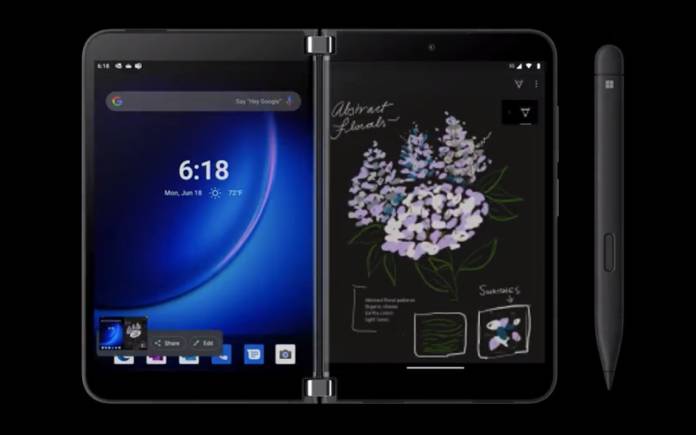 Now that Microsoft has released the much-awaited Android 11 OS update for the original Surface Duo, we can expect the hybrid phone-tablet and its follow-up, the Surface Duo 2, will receive a number of new cool features. The second-gen model is more advanced with its Slim Pen 2. It can charge the stylus. A recent update is making the Slim Pen 2 more powerful. By that we mean it turns into some kind of “magic wand” as just a click of the digital pen will do a screenshot on the device.

The latest monthly Surface Duo 2 update is bringing the Duo Pen Shortcut feature. This includes doing a screenshot with a single press on a button on Slim Pen 2. You need to activate the pen shortcuts first for it to work.

The January 2022 update lets you customize the button to launch whatever app of function you want. The update also adds camera improvements, several fixes, and better touch responsiveness among others. Expect to receive build number 2021.1116.111 and make sure you have at least 559MB of extra storage.

A number of improvements have been made according to a changelog. Camera usability of night mode, auto focus, and 4k video recording have been improved. System reliability and stability, touch responsiveness, and charging reliability with third-party chargers have been improved as well. Those scenarios outlined in the Android Security Bulletin (January 2022) have been addressed already.