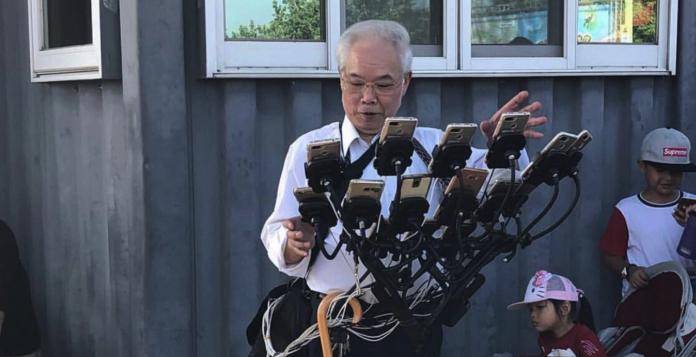 Grandpa Shark. That’s what I think this 70-year old Taiwanese is. He’s such a pro gamer for playing Pokemon Go with so much passion. Chen San-yuan is perhaps the most dedicated Pokemon Go player in the world for playing with a total of 11 smartphones–eleven! That’s a lot but we understand why he’s so into one of the most phenomenal augmented reality games ever. If we’re part of the Pokemon Go team, we’d hire grandpa to become a spokesperson. He definitely knows how to catch ’em all.

San-yuan usually bikes around town in Taiwan with a rig that contains all 11 phones. We have no idea if he owns all but it doesn’t matter.

He started to become popular back in August when his story reached the international headlines. San-yuan seems to be aware of his fame that he now has a rig made for walking.

Grandpa is said to spend a thousand dollars each month to to fund his hobby. In an interview with a local newsgroup, San-yuan shared his favorite character and what he doesn’t like to do. He doesn’t want to assault gyms and his fave Pokemon is Snorlax.

The Taiwanese Pokemon Go fan is already a trainer so we know he’s very busy. He makes sure he’s ready by bringing a power pack to charge the phones. He tries to keep an eye for those rare and elusive Pokemon. We believe he already has his own schedule.

We’re not much curious about the number nor what types of Pokemon he has already caught. We want to know if he’s already retired that he can afford those many phones. He seems to have all the time in the world. Where’s his family? Does he have a wife? How about grandkids? Do his grandkids share his love for Pokemon Go?