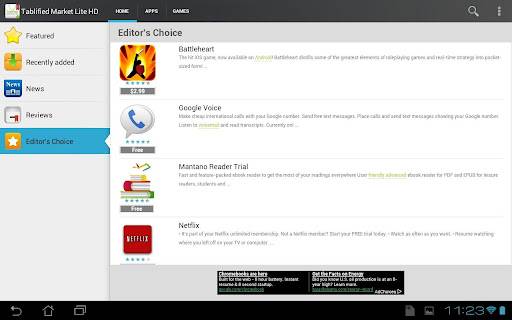 If you’re the proud owner of a Honeycomb or Ice Cream Sandwich tablet, you know that finding good tablet-optimized apps in the ever-growing Google Play Store is something of a chore. If you don’t already know what you’re looking for, then finding anything that takes advantage of the large screen and resolution on tablets is frustrating. Enter Tablified Market HD, a curated list of the apps on the Google Play Store that support tablet user interfaces. It’s not a seperate app market, just a dead-simple way to find great tablet apps already available. Appropriately, you can download it for free in the Google Play Store.

The app is pretty much what you’d expect: a showcase for the newest and best tablet apps in the Google Play Store. The Featured tab is best skipped, as it’s mostly ads (including an ad for the ad-free version – how meta). The good stuff starts in the Recently Added tab, where (naturally) the newest high-profile apps supporting tablets are shown off. For example, the latest edition has The CW Network’s video app front and center. News and Review are provided by the app creators, and Editor’s Choice has a selection of some of the best apps available at the moment, most of which have been featured right here on Android Community at one point or another.

As a quick and easy way to find tablet-oriented apps, Tablified Market shines. Further divisions are made among regular apps and games, with sub-categories in each along the standard Play Store lines. If you find yourself using Tablified Market a lot, the HD Pro version is just a buck fifty at the moment – a bargain for regular tablet users. Though the database is dependent upon its editors updating and doesn’t automatically add apps, the updates come pretty regularly, so you can be confident of new apps to check out.