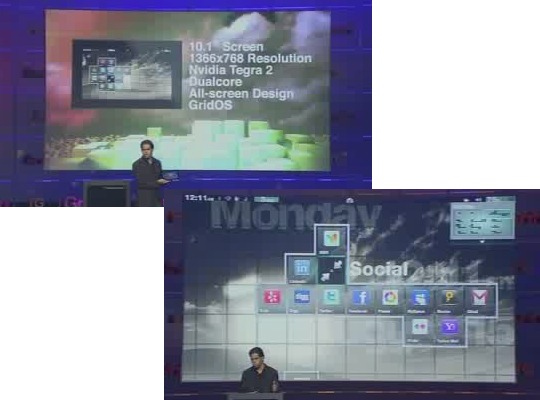 TabCo’s CEO “IQ” Ian Quincy started his speech with a recap of the many viral ads that’d been revealed over the past few months. “TabCo is a parody company, and I’m not a real CEO.” Fusion Garage is revealed to be the “true” company behind the tablets “I’m confident I’m sure, but I’m not insane,” he says, noting that had they revealed the tablet was from Fusion Garage in the past, this proposed new tablet would not have been given a fair chance. In the same vein, all users who had previously purchased a JooJoo tablet before will receive this new tablet for free.

Chandra Rathakrishnan, CEO of Fusion Garage, continued by saying they were taking the Android kernel and building from this to create a new OS called “Grid”. Search they said will be integrated via Bing, while apps will be available through the Amazon Appstore and the Grid Shop, a place where you can submit apps specific to the tablet and/or Android apps that are universally available. This tablet will be known as the “Grid 10”.

To unlock the device itself, you’ve got to sign your signature (or whatever else you want, whatever you set up), and you’ll be brought out to a grid. This grid is made up of squares, each of them with one single shortcut which can do several things – open an app, add an app, change background, edit the look of the Grid, and more. This is all organized in Clusters, this being collections of shortcuts in any configuration, very similar to folders in Android except here they’re all on the grid – expanding and collapsing Clusters is one tap of a square.

Email looked quite basic save for its ability to view it on the grid, many different sizes, colors, and abilities to view. Browsing in a web browser appeared to be “new” looking as it uses a wheel in the lower left of the screen, this able to disappear at a tap bringing you what they’re calling full screen browsing all the time. Galleries for images appear very similar to Android but does appear to have some integrated editing software working instantly.

This device will cost 499 USD 599 for 3G and Wifi, “advanced” headphones included, all available on fusiongarage.com now, shipping on the 15th of September.