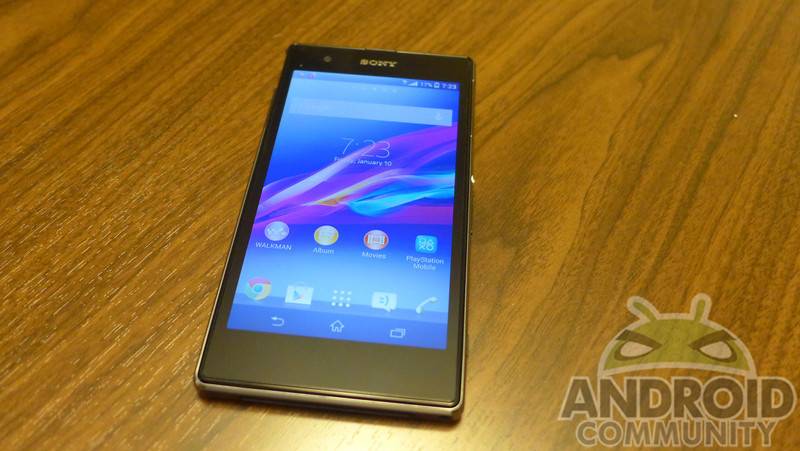 T-Mobile previously released the Sony Xperia Z, and the follow-up device has recently arrived with the carrier. This other device is the Sony Xperia Z1S, which sports some similarities in the specs, but does step up a bit in the way of the external design. That having been said, T-Mobile allowed us some hands-on time with the Xperia Z1S during CES and that meant a full week of carrying this latest waterproof Sony device. Curious about how the phone stands up, read on for our full review.

Just like some of the other Sony devices, the Xperia Z1S has two glass panels — one covering the front and the other covering the rear. This isn’t the first, or only device to have such a setup, however given the darker coloring, this one could strike fear in the hearts of those who try to avoid fingerprint smudges. But on the flip side, the waterproof design means it should be easy enough to keep clean. 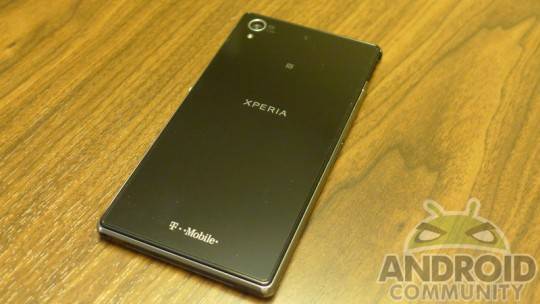 The Sony Xperia Z1S is fully waterproof which comes by way of the IP55 and IP58 ratings. One word of warning though, you will want to make sure all the covers are fully closed before taking this in the water. Moving past the novelty of being able to take the phone swimming, we look towards the display, which is likely where you will be staring the majority of the time.

The Xperia Z1S is packing a 5-inch Full HD display. Sony references this as being a TRILUMINOS Display for mobile with X-Reality and making use of the latest BRAVIA technologies. For clarification, the resolution is 1920 x 1080 and it sits with a ppi of 441. While there is quite a bit in terms of buzz words here, the display didn’t prove to be particularly vivid during our hands-on time. That isn’t to say the display was bad, maybe just not quite as nice as we had hoped and expected. Basically, it just seems the colors didn’t quite pop.

Along with the two glass panels, one can expect to find an Xperia and T-Mobile logo on the back, as well the camera lens and flash, which are sitting in the upper left hand corner. Continuing with the tour of the device and we find a headphone jack sitting on the top and a speaker across the bottom. Split between the sides you will find the SIM card and microSD card slots as well as the microUSB connector for charging, power button, volume rocker and dedicated camera button.

Overall the handset feels solid when being held, was fairly pocketable and as we have seen with earlier Sony devices, makes use of the three capacitive buttons in terms of navigation. We had a bit of issue using the phone one-handed, however we can blame that on smaller hands, the 5-inch display, or both. For reference, the Xperia Z1S measures in at 5.74 x 2.91 x 0.34-inches and weighs in at 5.71 ounces.

Other notable specs for the Xperia Z1S include a quad-core 2.2GHz Snapdragon 800 processor, 2GB of RAM, 16GB of internal storage, 3000 mAh battery and 4G LTE connectivity. The handset also has support for memory cards up to 64GB in size and sports a 20.7 megapixel rear-facing camera.

Sony and T-Mobile launched the Xperia Z1S with Android 4.3 Jelly Bean. To get this out of the way in the beginning, there hasn’t been anything mentioned in terms of when, or if Kit Kat will arrive. For now, users all be greeted with a relatively clean lockscreen setup and a relatively clean homescreen setup. The lockscreen does have the date and time, as well as a quick launch for the camera. Otherwise, a swipe up or down will unlock from the lockscreen. 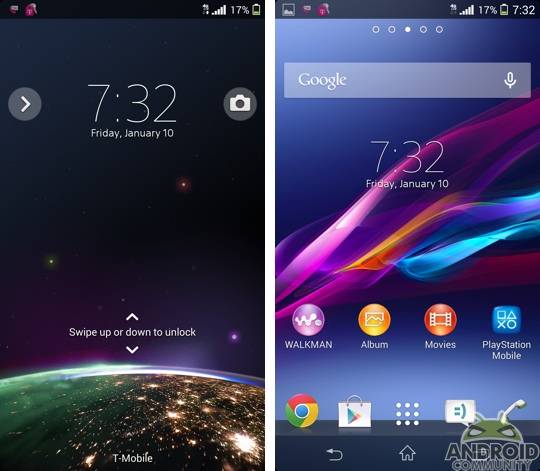 The initial homescreen setup has the basics such as Phone and Messaging. There is also access to Chrome and the Play Store as well as to several of the Sony branded apps. Those include WALKMAN, Album, Movies and PlayStation Mobile. And as one would expect with an Android smartphone — these can be customized to your liking. 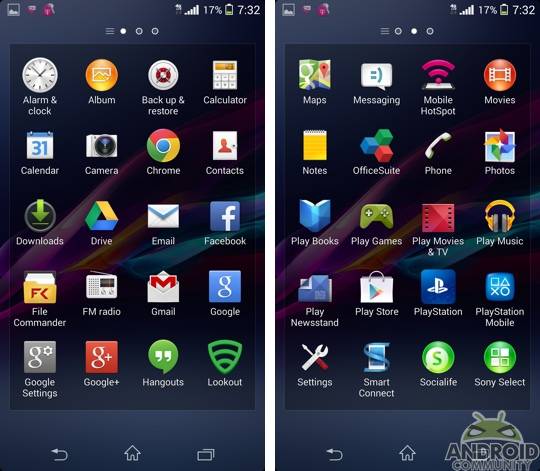 The default installed apps can be seen in the image sitting above and below. Basically, you are looking at the basics from Google as well as several from Sony and several from T-Mobile. The app drawer offers easy access to search and also uninstall apps. There is also a few options available for organizing those apps — either in your own order, alphabetical, most used or by installed. 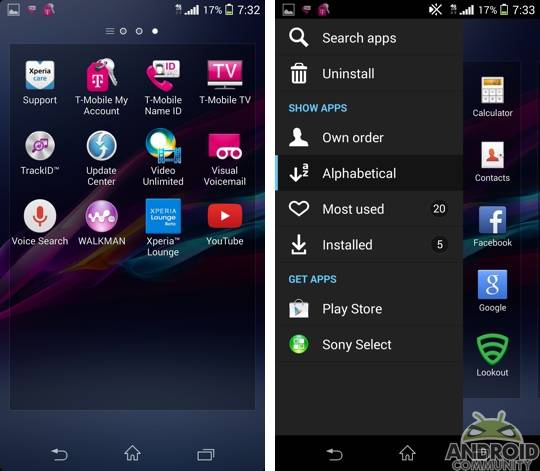 While the Xperia Z1S isn’t the cleanest in terms of apps, seeing this list on a T-Mobile branded Sony device really doesn’t come as much of a surprise. Some of the apps can likely be overlooked, but on the flipside, some will likely come in handy. Otherwise, while this is an Android 4.3 experience at the heart, Sony does offer quite a bit in terms of the software. One example here, which we will touch on a bit later in the post deals with the camera. 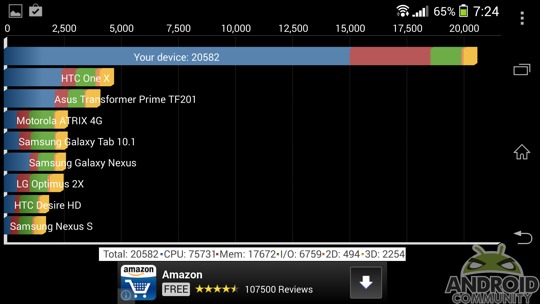 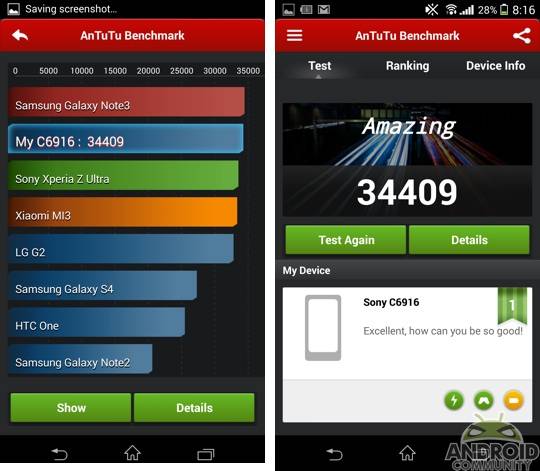 We will let these speak for themselves, but we have to say the number fell just about where we would expect based on the hardware specs. Remember, the handset is powered by a Snapdragon 800 processor with 2GB of RAM. In the case of AnTuTu, you’ll notice this meant it was a bit below the Galaxy Note 3, but also above the Xperia Z Ultra, LG G2, Galaxy S4 and HTC One.

Battery life is another touchy subject. Regardless of how good a phone looks, how well it feels in your hand, or performs otherwise — battery issues can spell disaster. The issue with talking battery life though, it is kind of personal and comes down to how you use your phone and what you are doing with said phone. Basically, more screen time and more heavy activities such as video streaming and gaming will have it dropping much quicker.

With that in mind, we spent our time as we think many would. That means some voice calls, some text messages and plenty of messaging with Hangouts. There was also some audio and video, and even a few minutes with some casual games. We also took the time to make sure the camera, and camera related features were up to par. 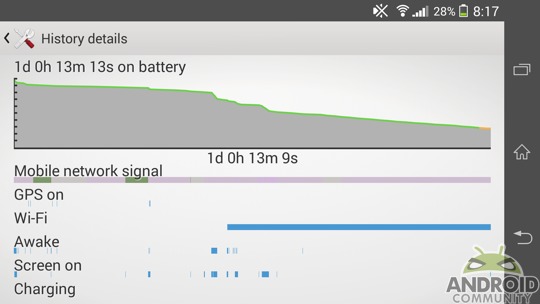 Without getting super specific, we can say that we were able to make it a full day without having to worry about running the battery all the way down to zero. Granted, some of the later nights and longer days at CES put us very close, but in a more true 8 hour work day (with some time for a commute mixed in) and we wouldn’t anticipate there being much trouble.

And for those worried about the battery life, Sony does offer a few tools to help improve things. A few of these are the Stamina Mode and the Low Battery Mode. The Stamina Mode means all the radios (WiFi and Cellular) are disabled when the phone is in standby mode. Stamina Mode does still allow you to get incoming calls, text messages and alarms. Basically, this means some features will be off when the display is off.

The Low Battery Mode kicks in when the phone battery reaches 30 percent. This setup is customizable and will basically turn those selected features off. Options here include the mobile data, WiFi, Bluetooth or GPS. You can also choose to disable the sync options once the battery drops down to below the 30 percent mark. While no mobile battery is perfect, we were happy with what Sony has to offer here, not only did the phone handle our needs, but those Sony tools certainly help to further conserve. 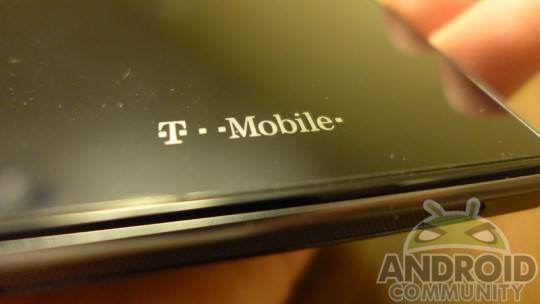 Network coverage and speeds will vary from market to market. But in the case of the T-Mobile coverage with the Xperia Z1S — we were pleasantly surprised. As we mentioned at the top of this post, we did our hands-on time for this review during CES. For those who have never been — mobile coverage it generally terrible.

The Xperia Z1S has support for HSPA+ 42 and LTE. As for our experience, the coverage was more than acceptable and the speeds were more than enough to help us get the job done. That isn’t to say there weren’t a few dead and/or slow spots from time to time, but that is likely more to where we were, than as a result of the network. Bottom line here, the network coverage we saw with the Xperia Z1S during CES week convinced us to start looking more towards other T-Mobile devices.

Our overall experience with the Xperia Z1S was positive, however one place it really shined was with the camera. Just looking at the mix of camera hardware and camera software and it is clear Sony put quite a bit of effort in. In fact, Sony touts this as having the “world’s best camera in a waterproof smartphone.” 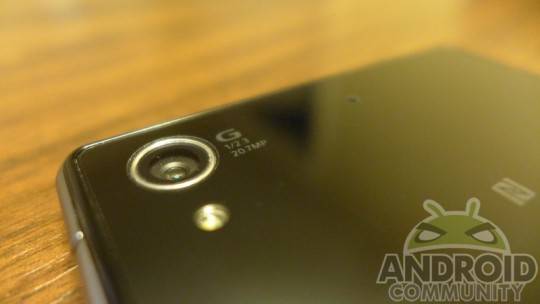 While that may be somewhat of a specific statement, Sony didn’t skimp on the hardware. The rear camera is a 1/2.3 20.7 megapixel Exmor RS. Other key bits about the lens show is as being a 27mm wide angle and with an aperture of f/2.0. Sony also shared how this makes use of the BIONZ for mobile setup, and has an ISO 6400 setting for taking pictures in low-light.

What you see in the image below is the default camera interface. Basically, the shutter buttons, access to the gallery and modes are on the right. The settings, flash adjustment and option to switch between the front- and rear-facing cameras are on the left. 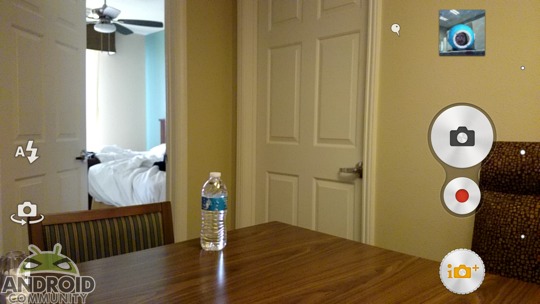 Sony does limit the 6400 ISO setting to the Superior Auto mode. Otherwise, using the regular manual mode you will be limited to ISO 800. This just breaks into one key aspect of the Sony handsets — plenty of camera options. Aside from the two mentioned there is also Info-Eye, Social Live, Picture Effect, Sweep Panorama, Timeshift Burst and others. One of those others does also add a bit of fun — the AR effect mode which lets you add fun things such as dinosaurs. 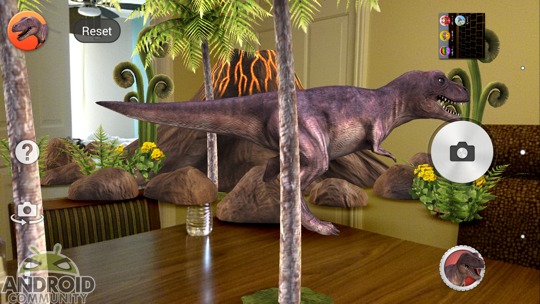 Otherwise, overall the camera seemed to hold up well in a variety of situations. That is to say, up-close and at a distance. We also saw pretty good results in both high- and low-light settings. All said and done, the camera on the Xperia Z1S seems to be good all around. Sitting below are a few random (and unedited) sample shots taken with the Xperia Z1S.

Assuming one isn’t bothered by, or can look past the numerous Sony and T-Mobile branded apps that come pre-installed, the Xperia Z1S is s solid offering and one that should at least be considered. Sony managed to pack something that can be described as feature rich into a good looking exterior. The device is slim, it feels solid in your hand, and overall, it is a good looking device. 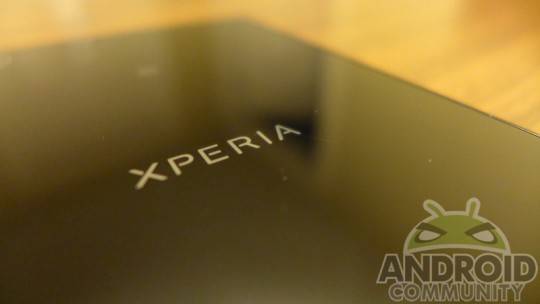 No phone can be described as perfect, and we wouldn’t go as far as calling the Xperia Z1S perfect. But on the flip side, Sony did some good work in terms of the camera setup and battery life. There also weren’t any complaints in terms of connectivity, and the internal specs such as the processor and RAM are high-end.

We aren’t sure how many would be looking to pay full retail on this handset, but otherwise, T-Mobile does have it attractively priced. At the time of the review, the T-Mobile Xperia Z1S is available for no money down and with 24 monthly payments of $22. That of course, can then be combined with their UNcarrier approach to voice and data plans.