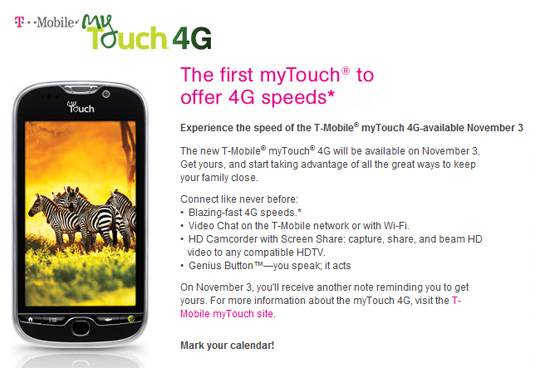 The rumors we heard earlier this week were true, T-Mobile is set to release it’s upcoming myTouch on November 3rd. Named the myTouch 4G to reflect it’s ability to be used on T-Mobiles HSPA+ network and will launch for $199 with a 2-year contract.

The phone is just as we have heard and expected. Coming with the new HTC Sense UI (now named the myTouch UI) above Android 2.2, this is definitely one of the key contenders in this year’s holiday cell phone war.

The phone will feature T-Mobile TV, as well as the 3 second boot that we saw earlier in the month. We were at the event today and expect a full review and hands-on video here soon.