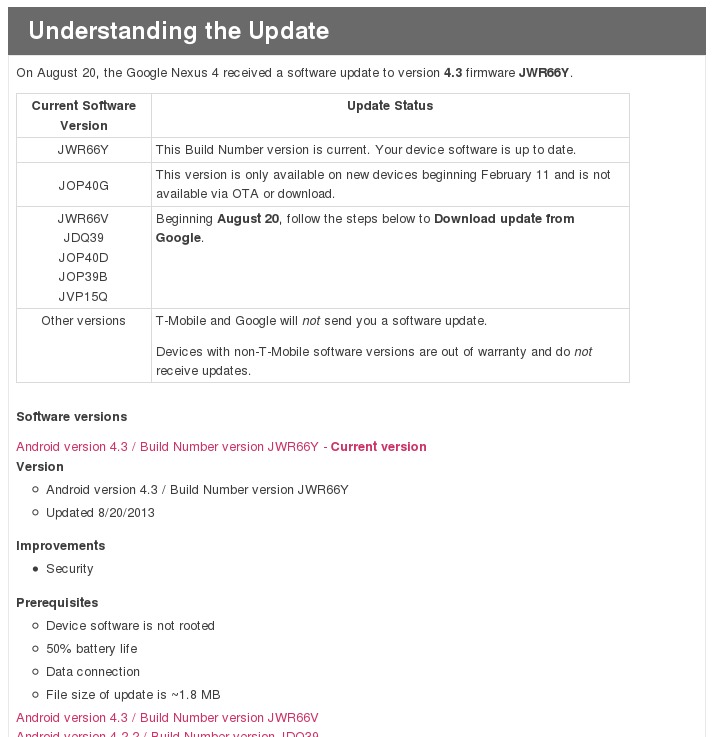 Yesterday, T-Mobile rolled out without much fanfare or detail a small update for its Nexus 4. Now it seems that the update is also arriving on a variety of Nexus devices including the Nexus 10, the 3G variant of the 2012 Nexus 7, and the Galaxy Nexus.

T-Mobile updated the software update page for its Google Nexus 4 yesterday, adding an update with a build version number of JWR66Y. T-Mobile doesn’t give out any detail about the update other than mentioning security improvements. It also doesn’t bump the version number from the current Android 4.3, hinting to the very minor nature of the update.

It seems that other T-Mobile Nexus devices are also going to benefit from this mysterious security update. The Galaxy Nexus was first to get the update and then reports started coming from Nexus 10 users that they were also receiving it. And lastly, last year’s Nexus 7 was said to also be getting the update but only on the 3G models.

Although there have already been numerous confirmations, T-Mobile has remained silent about the update on its support pages. There is also no news if the WiFi models of the 2012 Nexus 7 or Galaxy Nexus units bought from the Play Store will be getting the security update as well.