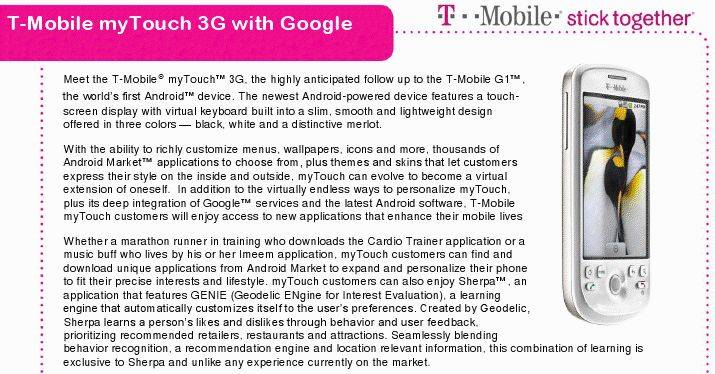 As expected, T-Mobile USA have announced the myTouch 3G, their second Android handset and the follow-up to the T-Mobile G1.  Recognizable as the HTC Magic – which Android Community reviewed in back in May – the phone has a 3.2-inch HVGA resolution capacitive touchscreen, 3.2-megapixel camera and the usual array of Google applications.

That includes YouTube, Google Maps (with Latitude and Street View), GTalk and GMail, support for IMAP, POP and Exchange accounts and one-touch media uploads.  However, for the first time on an Android device, T-Mobile have loaded an app called Sherpa, featuring GENIE (Geodelic ENgine for Interest Evaluation), onto the myTouch 3G, which promises to recognize patterns of use and offer suggestions based on past behaviours.

The T-Mobile myTouch 3G is expected to go up for pre-order on July 8th, though initially only for existing subscribers to the carrier.  National availability is expected in early August, with the handset priced at $199.99 with a new two-year agreement.  Three color options will be release: black, white and merlot.