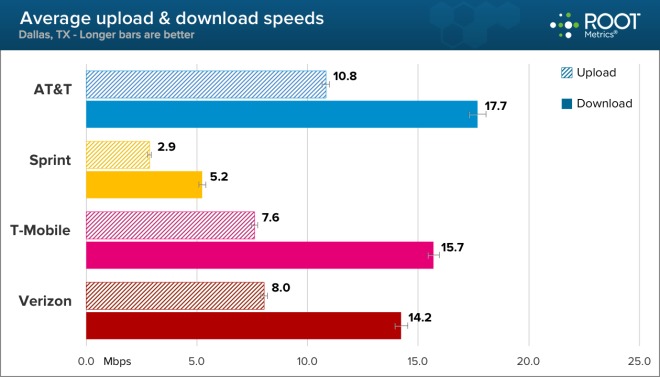 T-Mobile, having recently added LTE to their arsenal, is rolling out the service to major metropolitan areas nationwide. One of those areas is Dallas, TX, and the speed gains are noticeable. Though they still lag quietly behind Verizon and AT&T, T-Mobile has caught up in a big way. For the people of Dallas, the Un-carrier has some unreal data speed.

RootMetrics, a company aimed at testing the networks of carriers all over, has finished their run-through of T-Mobile in big D. While still behind AT&T in overall statistics, T-Mobile is now the number two carrier in Dallas, technically. With an upload speed of 15.7 Mbps on average, they’re a full two clicks behind AT&T, and 1.5 Mbps ahead of Verizon. Big Red has a faster upload time in big D that T-Mobile, at 8.0 and 7.6 Mbps respectively, but AT&T once again took the cake with an upload speed of 10.8 Mbps.

The average upload wasn’t the only place T-Mobile won out, either. The Network speed index — which highlights overall speed of the network for data, text, and call — puts them at 93.3 out of a possible 100, with Verizon hovering around 90. AT&T is nearly perfect with a score of 98.3. An area for improvement is network reliability, where T-Mobile came in a solid third behind AT&T and Verizon. That test encompasses doing “what you want to do, when you want to do it” according to RootMetrics.

A few things can ble gleaned from this type of testing. While it’s only Dallas, we feel it’s a good barometer for the capabilities of T-Mobile’s new network, and shows just how much parity there really is when it comes to the top three carriers. The coverage area needs improvement, which would bolster the reliability scores, but the LTE gains T-Mobile has are impressive nonetheless. Sprint was miserably fourth in all testing, warranting no discussion.