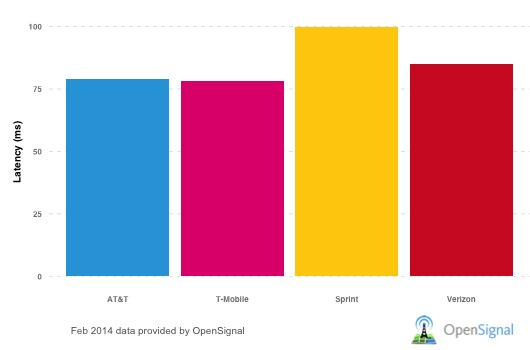 Latency is one of those under-the-radar tech terms that is largely forgotten. T-Mobile, however, hasn’t forgotten about it — they’ve got the best latency figures, according to Open Signal. The Uncarrier has some of the fastest latency figures when compared to the other three major network providers, blowing one out of the water.

Latency is a pretty simple concept, really. In a macro sense, latency has to do with the time it takes for the carrier to send your device a packet of information. When you hear about an HSPA network , that stands for High Speed Packet Access (T-Mobile is HSPA), but all mobile technologies send and receive packets, and have latency because of it. Latency is measured in milliseconds, so keep that in mind when you look at these figures. A lower latency means a fster network, as it takes less time to transfer info.

T-Mobile’s LTE latency figures show they are between 75-80 milliseconds, which is about the same as AT&T. Verizon lagged behind ever-so-slightly at 85 milliseconds, while the Sprint remains the rooster that says “goodnight, everybody!” instead of waking you up with latency numbers of around 100 milliseconds.

When it came to other technologies, t-Mobile had similar advantages. Their UMTS network was faster than AT&T’s (104ms to 128ms), and their HSPA+ network also schooled AT&T (112ms to 123ms). When it came to regular HSPA figures, AT&T edged little magenta ever-so-slightly at 131ms to 134ms. Verizon and Sprint, who share similar EVDO technologies, were slower across the board.

Though they don’t have the coverage others might, T-Mobile’s speeds are certainly impressive enough. This is also not counting their upcoming 20+20 LTE rollout, which should improve T-Mobile’s figures, here.