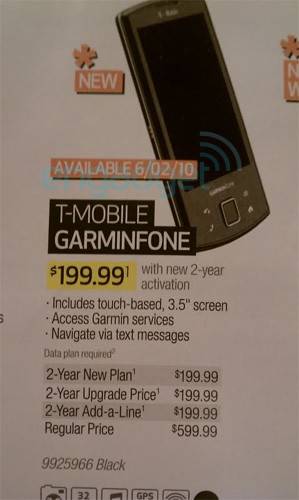 The only thing left now is confirmation from T-Mobile but this phone is pretty much a lock for a June 2nd release. If you’ve heard that date before it’s because the myTouch 3G Slide will be releasing on the same day. Engadget received this leaked screenshot of the Android powered Garmiphone. This screen not only outs the pricing for this handset but also the release date.

You can have this device for $199 with a new 2 year contract. The off contract price will be $599, there have been rumors that T-Mobile will eat some of the off contract price and lower it to $450. This would put it right on par as far as pricing with other recently released smart phones.

The Garmiphone has a 3.5-inch touch screen, a 3-megapixel camera and Android 1.6. The strong point of this handset is its deep navigation software. But there strong point may also be its biggest weakness. This software brings with it a new custom UI, we all know that upgrading custom UI’s is a daunting task. There is no word on when or if this phone will be upgraded to Android 2.1 or higher. Unless you travel a lot, the myTouch slide may be a better choice.