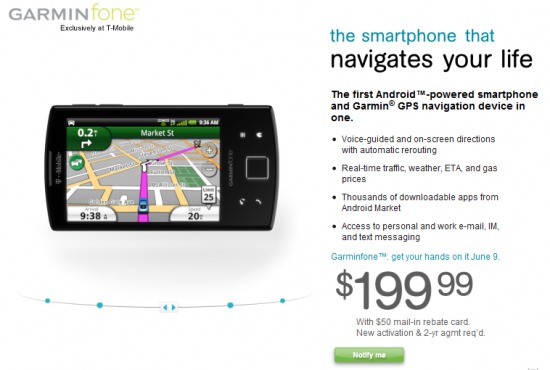 T-Mobile has recently announced the arrival of the Garmifone powered by Android. This is the first Android device that will feature Garmin navigation. T-Mobile also has a contest on twitter where they will give out a few of these to the lucky winners.

The $199 price includes a $50 rebate and a new 2 year contract. This is the second Android device T-Mobile is releasing in June. There’s still a chance for a third if the Samsung Galaxy S gets a speedy release (not likely). Given the fact that this phone has Android 1.6 and is not as powerful as handsets that’s been recently released, $199 may be a bit high.

Since this is a Garmin product, it will be full of navigation goodies and there is a dock included in the packaging. As far as the contest goes:

“The T-Mobile Garminfone Navigate Your Life Sweepstakes will launch at 10:30 a.m. Pacific Time today on T-Mobile’s Twitter account, giving Twitter users the opportunity to win one of five Garminfones. To enter, Twitter users must follow @TMobile_USA and are encouraged to tweet their most interesting story about getting lost without a GPS device. Entries must use the hashtag #needgarminfone. The deadline for entries is 11:59 a.m. on June 9. Official Rules are at http://ow.ly/1PPFr.”