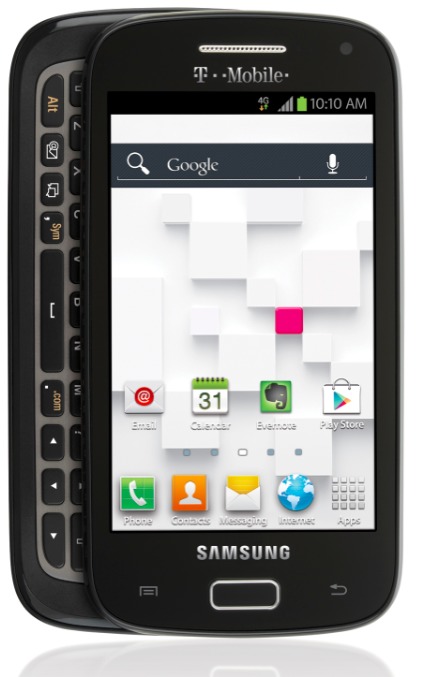 The newest Samsung Galaxy smartphone to grace the T-Mobile device portfolio has been announced today by the carrier and is headed to stores nationwide in just a few weeks. We’ve seen a few leaks before but now you can officially meet the all new Samsung Galaxy S Relay 4G with T-Mobile HSPA+ speeds. More details below.

The Relay 4G isn’t what we’d call a top-tier smartphone and just like many other carriers as of late T-Mobile is joining them by offering this decent mid-range smartphone for the budget crowd headed back to school and ending summer. T-Mobile just dropped the news that this smartphone will be available September 19th.

The Relay 4G is a pretty well rounded smartphone and comes with a 4-inch AMOLED display with a somewhat attractive WVGA 480 x 800 resolution display. The rest of the specs however are quite decent and it comes with a 1.5 GHz dual-core processor, 1GB of RAM, 8GB of internal storage, and of course that 5-row slideout QWERTY keyboard.

You’ll also get a 5 megapixel rear camera, 1.3 front for self portraits or goofy photos, 720p video recording and a decently sized 1,800 mAh battery that should keep you typing away on that hardware keyboard all day long. In other good news the Relay 4G comes out of the box running Android 4.0 Ice Cream Sandwich and Sammy’s Touch Wiz UX for a simple and easy user experience. Pricing is ok given the device and it will run you $149, although that is after a $40 mail in rebate since that is a reoccurring trend from T-Mobile as of late. Stay tuned for more details and expect this in stores come September 19th.