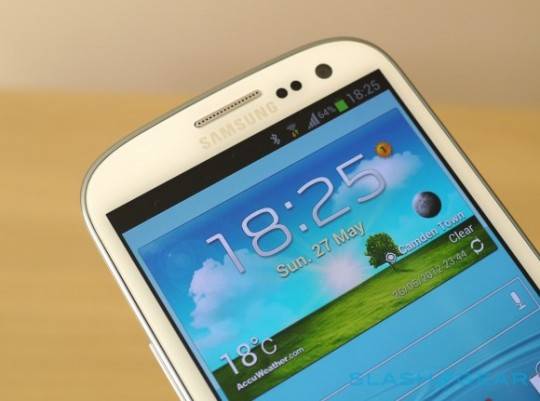 The Galaxy S III is far from the newest device on the market, but at the same time, it isn’t one that Samsung and the carriers are done with just yet. In fact, T-Mobile has just begun rolling out an update. The update is heading to those carrying the Galaxy S III LTE (t999L) and is arriving as Android 4.3 with baseband version T999LUVUBMK4. And along with the change in version numbers, there are some new features.

To begin with, this update brings Galaxy Gear smartwatch support. Or in other words, those carrying a T-Mobile Galaxy S III LTE can now move forward and purchase the $300 smartwatch. Along with support for the smartwatch, this update added something that may be useful to the bring-your-own-device crowd — support for Samsung Knox. This is a security feature that essentially keeps your personal and work apps and data separate.

The update is rolling out over-the-air, but is also available by way of Kies. T-Mobile updates mean you must be using a non-rooted device and the carrier suggests beginning with at least 50 percent battery life. Or better yet, take care of the update while plugged into a power source. Otherwise, this update is on the larger side so you may want to grab it while connected to WiFi. According to the T-Mobile support pages, the update is 500MB.

We have yet to see a date as to when the rollout will be completed, but in the meantime, users should be on the lookout for an update notification. Once that happens, it is just a matter of following the prompts. Aside from having some patience and waiting for the notification to arrive, those looking for it now will be able to navigate to Settings -> More -> About device -> Software update to try and get the process started.