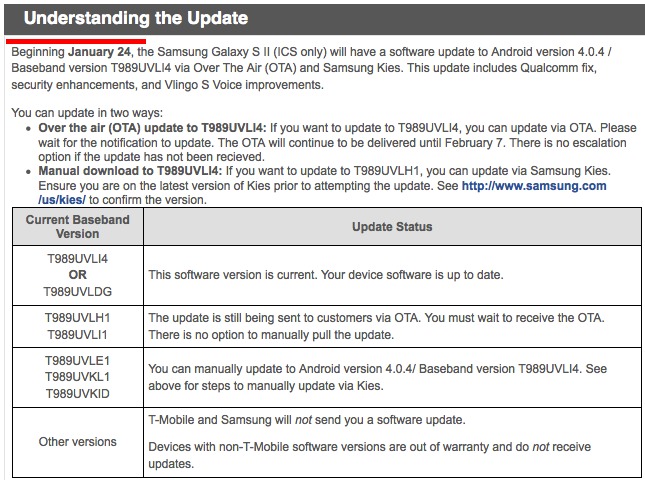 The flavor of the popular Samsung Galaxy S II that graces the T-Mobile network is receiving a quick software update today. Details have confirmed T-Mobile is pushing an update out over-the-air as we speak for the handset, although it’s still running Android 4.0 Ice Cream Sandwich. We have all the details on this small bug fixer after the break.

We know you’ve all been patiently waiting some news regarding Android 4.1 Jelly Bean for the Galaxy S II, but sadly that time hasn’t yet come. After the update you’ll still be on Android 4.0.4 ICS, but you’ll have plenty of bug fixes as well as security patches. This could also be paving the way and preparing the handset for Jelly Bean.

The update only appears to be about 11MB in size and brings with it security enhancements and a few tweaks and updates on the Qualcomm processor side of things. Vlingo S Voice is also getting some improvement, although that wasn’t specified much. As usual all the details are available from T-Mobile support forums. The international GS II just started getting Jelly Bean so hopefully US carriers like T-Mobile are next. 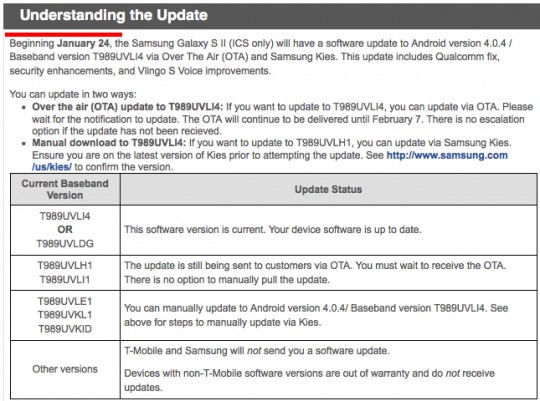 The image above is all Samsung and T-Mobile have provided, so the changelog is rather small. They don’t specify what the Qualcomm fix is for, nor anything else for that matter. Either way this update for ICS on the T-Mobile Galaxy S II is available now over the air, or as usual from Samsung Kies and a nearby PC. Give it a try and drop a comment below if you notice any changes.