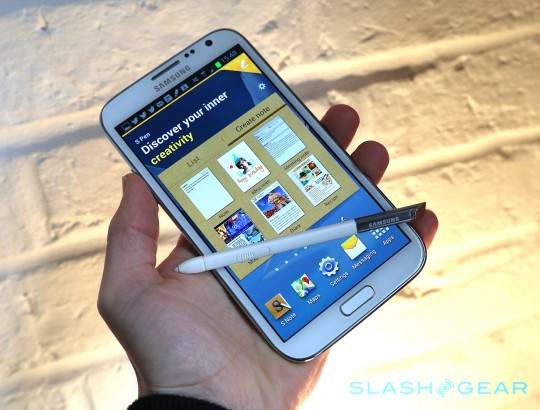 T-Mobile has yet to formally announce, however according to some users reports, it looks as if they have begun rolling out an update for the Samsung Galaxy Note II. The update is coming over-the-air and arriving as Android 4.3 Jelly Bean with baseband version T889UVUCMK7. Perhaps the key here, this update means T-Mobile Galaxy Note II users will be able to leave behind Android 4.1, which originally arrived back in June as v4.1.2.

While the update is coming over-the-air, given the size, this one may be better to download over a WiFi connection. According to several user reports, the update measures in at just under 615MB in size. If you happen to be carrying a T-Mobile branded Galaxy Note II you have a pair of options to consider. Sit back and wait for the update notification to arrive, or take the proactive approach and go looking for it.

We suspect at least some will be in the latter group so that being the case — you can navigate to Settings -> About device – Software update to try and get the process started. One important aspect to remember, as we often see with OTA updates, they tend to roll-out over time. Or in other words, this one may or may not be available for your device just yet. So far we haven’t seen any rollout schedule from T-Mobile in terms of an end date.

There is also a third option for the update. Users are able to grab the update using Kies. That method involves your regular computer and a USB connection and while not quite as simple and easy as the OTA method, T-Mobile does have some step-by-step directions available that will walk your through the process. For those, follow the T-Mobile source link sitting below.