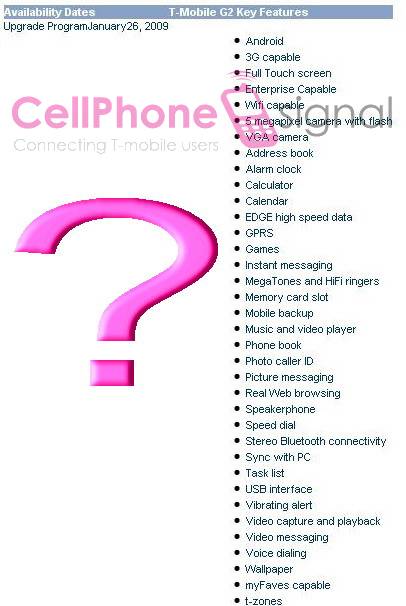 Well we called it, the new Android-powered handset that is coming to T-Mobile will appropriately be called the T-mobile G2. With the T-Mobile G2 there is plenty to get excited about.  The new Android-powered handset will have many features including 3G, full Touchscreen Enterprise capabilities. CellphoneSignal brought “leaked” specs but without any pictures which we find odd.

What else could you want in a phone? How about a 5-megapixel camera with autofocus and flash that goes great with video messaging? Now that we’ve got your attention, we will tell you about the microSD card slot that doesn’t stop you at 8GB, but gives you the full 16GB capability so this handset can creep up on the iPhone in terms of available storage.  You will still get the features you have grown fond of, such as picture messaging (MMS), wireless backup and Stereo Bluetooth (for those who miss it).

Your going to have the basic T-Mobile services such as Web2Go and MyFaves. Word on the street is the T-Mobile G2 will be hitting T-mobile retail locations the end of January 2009. The T-Mobile G2 will also be the first T-Mobile phone with video calling. With no pictures we can’t help but think something is a miss.

Editor’s note: Of course the rumor of the T-Mobile G2 is completely bogus!  As with any breaking news or rumors, there’s very little time for fact checking and unfortunately this is the world we live in.

I admit that Shawn was slightly overzealous with the story (and that’s what make him the perfect editor).  That being said, I fully support and back him on this piece.  Android Community does not owe any of you “displeased” visitors one f-ing apology.  Those of you claiming AC should be ashamed for running this story — well I guess you can say the same for countless other major publications starting with Mobile Crunch, Michael Gartenberg of Media Bistro or ZDNET.

So here’s the bottom line, if you’re not satisfied with our coverage, I’ve said it before in the community and I’ll repeat it here —- you’re welcome to visit other Android sites, Android Community isn’t the only Android news / community source on the web!  One last thing, feel free to email us your member ID (androidcommunity @ gmail.com) and we’ll be more than happy to delete it from the system.

Here is a full list of the available features that the tipster has provided us: