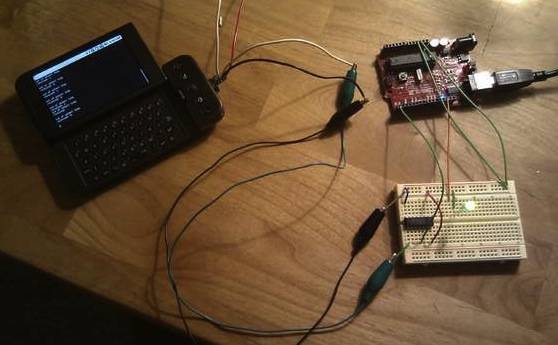 Modding Android handsets has been made particularly easy thanks to their open-source software, and so it’s almost a surprise that it’s taken this long to see integration with that other hacker’s delight, the Arduino microprocessor board.  Over at Instructables there’s a guide that explains exactly how to connect a rooted T-Mobile G1 up to the Arduino, potentially allowing for ready access to the handset’s 3G, camera, microphone, speaker and other functionality from whatever hobby electronics you hook up.

It’s the handiwork of Tim Heath and Ryan Hickman, who have produced the Python scripts which allow the G1 to communicate with the Arduino board.  The basic functionality turns an LED on and off, but of course the expectation is that electronics tinkerers will use the system to develop wirelessly-connected robotics, remote telepresence systems and generally interface with other external hardware.