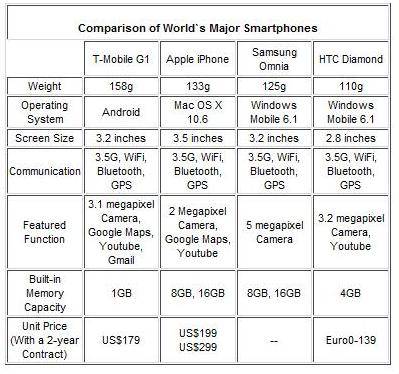 T-Mobile G1 sales in the US are expected to infuse NT$7 billion (around $220 million USD) into HTC’s fourth-quarter revenue, according to company sources. T-mobile plans to order between 1.5 and 2 million G1 handsets in the near future, with sales to be between 400,000 and 500,000 units sold in the fourth quarter of 2008.

Next year the T-mobile G1 is expected to contribute over NT$18 billion (around $560 million USD) to HTS’s overall sales for 2009. Peter Chou, CEO of HTC, stated at the T-Mobile G1 announcement that the presence of G1 and Android will definitely give strong pushes to development and applications of the network for handsets in the future.

Industry leaders note that although being inferior to the HTC Diamond, iPhone 3G and the Samsung Omnia in terms of exterior design, the G1 will draw in customers with its easy-to-operate interface and convenient network functions. The G1 will launch in other countries starting at the end of this year.