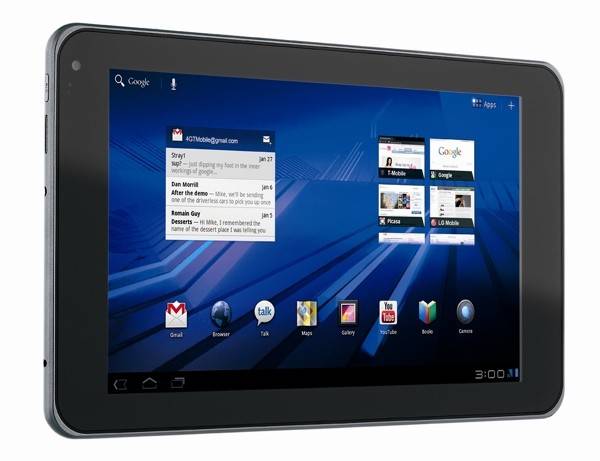 Remember the LG G-Slate announced at CES but then disappeared? Well it’s back, and T-Mobile has provided us with all the details of the upcoming Honeycomb-based tablet.

The tablet will feature a 1GHz dual-core Tegra 2 chipset, 32GB internal storage, and both a gyroscope and accelerometer! That’s not all, the impressive device also sports stereoscopic rear-facing video cameras that are capable of 1080p 3D video capture. Video chat will be done via front-facing 2MP camera and will work both over 4G or WiFi. 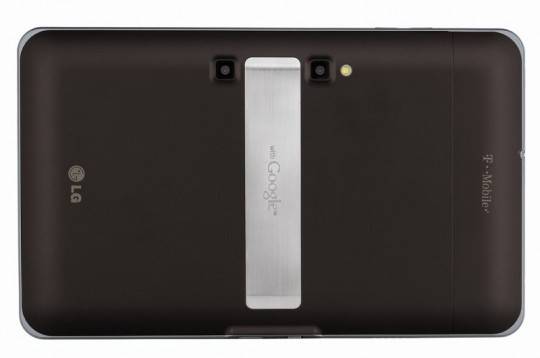 To view 3D content on the tablet you will need glasses. It wasn’t said as to which type you will need (active or passive), but it will definitely be supported.

The 8.9-inch tablet will be made available this spring, and pricing has yet to be determined – so stay tuned!

Bellevue, Wash. and San Diego — Feb. 1, 2011 PST T-Mobile USA, Inc. and LG Mobile Phones today unveiled their Android™ 3.0 (Honeycomb)-powered tablet, the T-Mobile® G-Slate™ with Google™ by LG. With a brilliant, high-definition (HD) 8.9-inch, 3D-capable multi-touch display, the T-Mobile G-Slate delivers a groundbreaking mobile entertainment experience, including the ability to record 3D and full HD video.
Expected to be available this spring, G-Slate is built for speed on America’s Largest 4G Network™ and is the first tablet in T-Mobile’s pioneering G-series of devices, which began with the world’s first Android-powered smartphone just over two years ago. The first 4G tablet from T-Mobile and LG, the G-Slate is powered by Android 3.0 (Honeycomb), the latest version of Google’s Android platform, which is optimized for tablets. In addition, the G-Slate will be among the first tablets to feature 3D capabilities including built-in support for 3D graphics, enabling consumers to capture and share their own 3D videos and experience 3D HD content right on the device with the aid of 3D glasses.

“The G-Slate represents the next chapter in T-Mobile’s rich history of Android innovation,” said Brad Duea, senior vice president, marketing, T-Mobile USA. “Tablets enable users to take with them the rich Web and entertainment experiences they have at home, and this will radically shift the way people interact with and consume content while mobile. The G-Slate delivers a powerful combination of premium mobile HD entertainment and T-Mobile’s lightning-fast 4G mobile broadband network.”

“We are excited to introduce the T-Mobile G-Slate by LG, which offers consumers an engaging new way to communicate, entertain and stay connected,” said Tim O’Brien, vice president of marketing for LG Mobile Phones. “Bringing consumers the latest in revolutionary HD tablet technology and an Android platform perfectly optimized for tablet use, G-Slate provides a unique multimedia experience.”

The sleek, lightweight G-Slate can easily be held upright in one hand for reading an eBook or magazine, watching streaming TV or browsing the Web while on the go. Featuring a rear-facing stereoscopic video recorder with 1080p for HD video capture and a 5 megapixel camera with LED flash, the G-Slate makes it easy to capture moments on video or with a photo. With the front-facing camera, customers can video chat with friends and family over T-Mobile’s network or Wi-Fi with Google Talk™. The G-Slate also supports 720p HD on-device video playback and HDMI output to show 1080p content on 3-D and HD displays. With a NVIDIA Tegra 2 mobile processor with dual-core CPU and full Adobe® Flash® Player support, the G-Slate enables quick and seamless browsing of rich Web content, multitasking and gaming. The G-Slate will also provide a superior entertainment experience when streaming live TV or downloading music and videos with lightning-fast speed over T-Mobile’s 4G network.

In addition, the G-Slate includes 32 GB of internal memory and features a built-in gyroscope, accelerometer and adaptive lighting for the latest applications and the ultimate gaming experience.

T-Mobile’s 4G network, America’s largest 4G network, has expanded into more than 100 major metropolitan areas, reaching more than 200 million people nationwide. Beginning today, T-Mobile’s network is also delivering 4G speeds to Albany, Augusta, Columbus and Macon, Ga., and Chattanooga, Tenn., in the South region as well as in Champaign, Ill.; Lansing, Mich.; and Rochester, Minn., in the Midwest. In addition to the expanding its 4G footprint, T-Mobile has aggressive plans to double the speed of its 4G network in 2011. T-Mobile expects that 140 million Americans in 25 major metropolitan areas will have access to these increased 4G speeds by midyear.

Visit the T-Mobile G-Slate product page to register for updates.