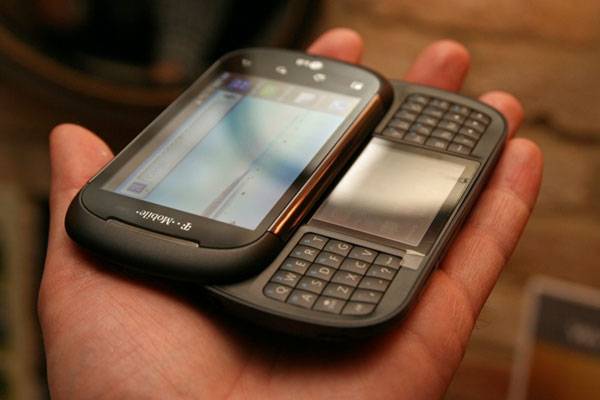 We are no stranger to leaked handsets around here, we see them quite regularly. The latest new smartphone to surface carries the T-Mobile and LG branding. The coolest feature of the slider is that it has dual screens. The main screen is on top of the slider and looks like any other smartphone at first glance. Kick the slider open and you see a keyboard that is very different from others on the market and has a smaller screen in the middle.

The keyboard has a normal QWERTY layout with the keys are split putting the ones you would use for each thumb on each side of the small LCD. The little screen will launch the apps that are on it as shortcuts. You can see in the photo that the screen has eight spots and two of them are shortcuts. I wonder if the screen will scroll after the eight slots are full. I can see that being a great place to put shortcuts for favorite web pages. Pocket-lint got to fondle the device and say it is a hefty smartphone that is fatter than the Milestone 2.

It has some design similarities to the LG Quantum and Optimus 7Q smartphones. Pocket-lint also notes that there was considerable movement between the two halves of the phone and hopes this isn’t final hardware. The device turned up when Orange and Kineto Wireless has an event in London to promote the Kineto Smart WiFi solution. The scuttlebutt says this is a US exclusive smartphone. The name Flip II was bandied about at the event and no hardware specs were offered.