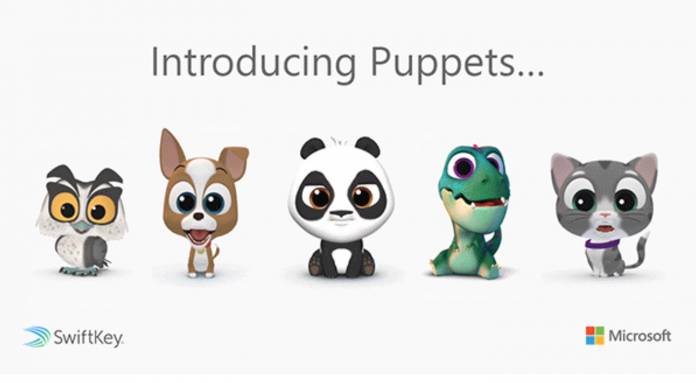 SwiftKey isn’t just a virtual keyboard now although they did start out that way. They’ve introduced a lot of new features and integrations that aims to make something as mundane as typing into something more fun. Now they’re letting people turn themselves into cute 3D animals with a feature called Puppets. It uses artificial intelligence that would let you record yourself as a panda, cat, dog, owl, or dinosaur and send the short video message to a loved one.

While Puppets uses 3D depth sensing, it also leverages AI so it recognises what your face is doing when you record your message. They used thousands of images and videos and then trained them into a deep neural network that identifies the facial expressions of people who are recording and then applies them to the animals that they chose. The Puppets recognise when you open your mouth or when you smile and then makes the animated animal copy it.

Since the faces are 3D moving objects, you would need to record yourself in a well-lit area (and maybe somewhere where people will not look at you weirdly). Choose from among the five mentioned animals and then record up to 30 seconds of video. This will only work on Android devices and you can only record one person at a time. After recording and playing back the video to make sure the animal “copied” you, you can send it through any of the supported communication apps.

This feature probably isn’t life-changing, but it is a fun way of communicating with family members and friends (and maybe even colleagues). This is just the latest in a series of integrations by Microsoft for the virtual keyboard. Previously, they embedded a search engine into the keyboard and then later on it also added support for Microsoft Translator so you’re able to chat with people in another language in real time.

Puppets is now available in your SwiftKey keyboard. The five animals are actually pretty cute so you can have fun trying them out.