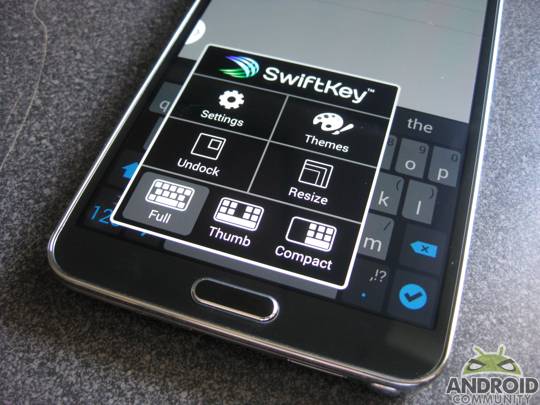 SwiftKey 4.3 arrived in beta form back in October. And with what appears to have been a successful few weeks in beta, the 4.3 release has graduated and arrived in the Play Store. The folks at SwiftKey have dubbed the 4.3 release as being one that has “Layouts for Living.” To that point, SwiftKey 4.3 brings a few options for keyboard layouts.

This release means users will be able to choose between three different keyboard options. These include the full (regular) layout as well as the thumb and compact options. The full keyboard option includes and extended layout for those rocking a tablet, and otherwise, the thumb keyboard splits things in two for easier two-thumb typing.

The compact layout shrinks the keyboard down and has it placed to the left or right — this one is good for one-handed use, especially when trying to type on a larger device such as the Galaxy Note 3. In addition, all three keyboard options can be resized and also undocked. Accessing the different options (as well as the Settings and Themes) is done by pressing and holding the “SwiftKey 123” key in the lower left.

This 4.3 release also added a Canadian English language model, which according to SwiftKey, that is a first. An example here is that the keyboard should now be able to understand local place names and personalities. It was said that “Canadian users who type “Stephen” will be more likely than American English users to be talking about Prime Minister Stephen Harper than author Stephen King.”

That all being said, we did spend a bit of hands-on time with SwiftKey 4.3 when it was first released in beta form. The video sitting above offers a look at the different keyboard options. And lastly, SwiftKey 4.3 is available in the Google Play Store and currently sitting priced at $3.99. Of course, those who previously purchased the app will get this as a free update.