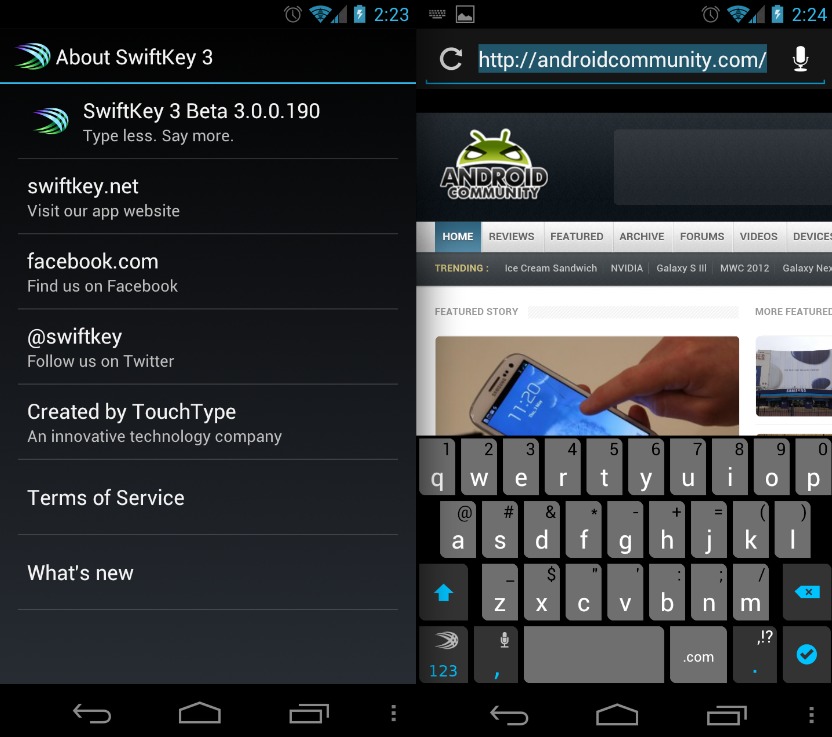 Now that all the Samsung news has calmed down this morning lets talk about keyboards. The popular SwiftKey keyboard has just received another update today for those who take part in their VIP beta. After we announced the new SwiftKey 3 last month, today they’ve added tons of user-requested features and once again improved on their ever so popular layout.

While Swiftkey X is still the version in the Google Play Store, you can get the new SwiftKey 3 from their VIP forums by signing up here. Then you’ll be able to enjoy the all new design, improved prediction, and great user interface that comes with SwiftKey 3. It looks like things are moving along great in the VIP Beta because the update today brings a handful of fixes and user-requested changes. Here’s the full change-log from SwiftKey.

-Improved the UI: there is now a dedicated comma key, and the <123> key is now in the bottom-left corner. And of course you still have the larger spacebar.
-Refined the Smart Punctuation pop-up.
-Reintroduced the Long-press duration setting.
-Improved Smart Space functionality.
-Further reduced lag on some devices.
-Fixed a number of bugs, including the missing decimal point in the numpad and the “What’s New” dialog popping up all the time.

They’ve moved the 123 button to the bottom left and replaced it with a dedicated comma button — which makes sense. They also improved the smart punctuation pop-up as many weren’t too pleased with the previous implementation although it doesn’t feel too different if you ask me. My main problem was some lag, and the punctuation popup sticking on-screen and both of those have been improved. Things are fast, fluid, stable, and makes typing a breeze. Things are looking pretty good right about now and I’m expecting this to be released to the public here soon.

I particularly like the new .com/.net/.tv shortcut on the keyboard. Very handy. For VIP members get the latest beta version of SwiftKey 3 by clicking here.