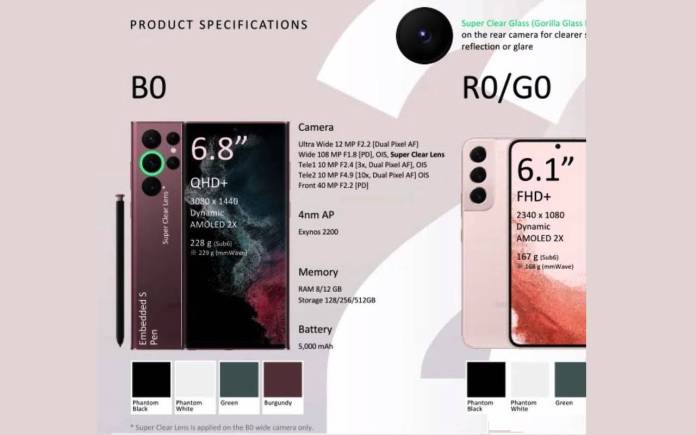 Zaryab Khan (@xeetechcare) presented a first look at the Samsung Galaxy S22 Ultra and Galaxy S22 specs. The Super Clear Lens has been highlighted. We believe it’s a type of Gorilla Glass protection from Corning. Mainly, this is for the camera module on the rear.

The Galaxy S22 Ultra will have a Gorilla Glass camera protection. That is new and seems to be very special.

According to the specs sheet, the Galaxy S22 Ultra which may also be called the Galaxy S22 Note comes with a 40MP selfie camera with F2.2 aperture. The main camera system includes a 108MP wide camera with Super Clear Lens/F1.8, 12MP ultra wide with F2.2 and Dual Pixel AF, 10MP telephone F2.4, and another 10MP telephoto F4.9 with Dual Pixel AF and OIS.

The image confirms the embedded S Pen slot just like in the previous Galaxy Note 20. This one actually looks like a Galaxy Note. The Dynamic Super AMOLED screen is 6.8-inches with 3080 x 1440 QHD+ resolution. The Sub6 version of the phone weighs 228g while the mmWave is 229.