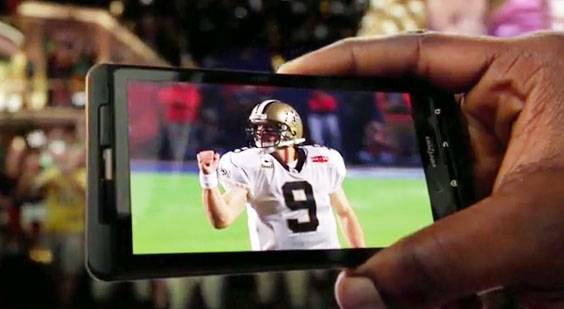 Welcome to the future, folks. We don’t have hoverboards, flying cards or instant pizza, but we can watch live sports on pocketable devices. And come February, we’ll be able to watch the biggest game of them all – assuming that the “we” in question uses Verizon and subscribes to their exclusive NFL Mobile service. It will be the first time that the Super Bowl will be officially streamed to mobile devices, a miracle of licensing negotiation as much as a technical achievement.

The game will also be streamed through NBC’s Sunday Night Football Extra, a premium web service. And it won’t just be the video feed that terrestrial TV watcher will be getting. Web viewers will get access to DVR features, multiple camera angles and social tools. There’s no word on whether or not these features will make it to Verizon’s mobile broadcast.

Unfortunately, all of these streaming options require a subscription. The only way to (legally) watch the game for free will be an old-fashioned over the air TV broadcast. What gives, NBC and Verizon? Something tells me that you’ll be playing the commercials anyway, so why not widen your advertisers’ potential audience?

Oh, and the NFL Mobile app isn’t currently working on Ice Cream Sandwich or the Galaxy Nexus. Hop to it, Big Red. On the other hand, owners of Verizon 4G LTE phones can get NFL Mobile for free – minus the Nexus. And before someone in the comments points this out: yes, I know that soccer (what everyone outside the Land of the Free calls “football”) is technically more popular than American Football. But that doesn’t count, because soccer is for girls.